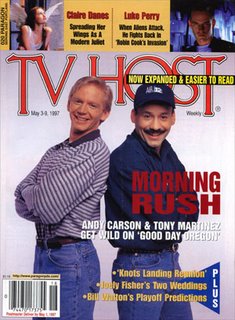 After my post about Toby Cook's new job with the Kansas City Royals, a reader asked where Toby's old co-host on the first KOAM Morning Show back in the early 1990s, Andy Carson, was.
Andy is host of Good Day Oregon on Fox 12, KPTV, where he has been since 1996. Toby and Andy left KOAM for jobs at Lynchburg, Va., after bringing the most unusual (and never duplicated) style to the morning show in the early 1990s.
Judging from the information on the magazine cover that accompanies this post, Andy, who interned on David Letterman's old NBC late night show, has continued the same sober, serious approach to his profession that endeared him to four-state viewers.
Posted by Randy at 6:13 PM