'The city was his love' 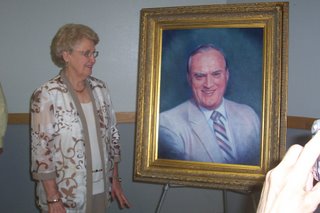 "The city was his love; he loved all the people," Betty Gilkey said tonight, moments after a painting honoring her late husband, longtime Lamar Mayor Gerald Gilkey, was unveiled.
Approximately 200 attended the ceremony, which was held in the Thiebaud Auditorium, a building that might not have existed if the mayor had not pushed for it in the late 1980s.
The painting, by Lamar artist Carol Melton, captured "that certain twinkle," said Keith Divine, who succeeded Mr. Gilkey as mayor. Divine told the story of how Gerald Gilkey came to Lamar, first became a city councilman in 1959 and then was elected mayor in April 1965, a position he held for 36 years "the longest serving mayor in Missouri history," Divine said.
Divine who has served the city 28 years, the first 23 as a city councilman, before succeeding Mr. Gilkey, noted that as mayor, Mr. Gilkey "never had a vote, but he always seemed to get what he wanted.
"And I never heard him say anything ill about a person."
Divine noted the mayor's accomplishments, which included, in addition to the Thiebaud Auditorium, the city's water system, Aquatic Park, and two Decembers in which city residents did not have to pay electric bills.
The short program also included remarks from Mayor Gilkey's son, Steve, and his widow.
The portrait will hang on the east wall at City Hall, Divine said, and if and when a new city hall is built in Lamar, the facility will be named after Mayor Gilkey.
My thoughts on Mayor Gilkey can be found in the Sept. 29, 2005, Turner Report
Posted by Randy at 8:49 PM

I forgot all about that dedication! Thank you so much for the story and picture! He was a wonderful man that did a lot of great things for our City!