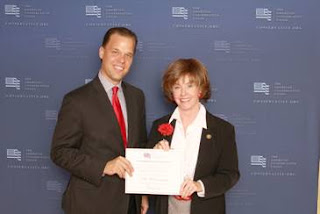 For her conservative values and commitment to protecting and defending Missourians’ liberties, Senator Jane Cunningham, R-Chesterfield, received top marks with a perfect 100 percent rating from the American Conservative Union (ACU) and is a recipient of the ACU Conservative Award. The ACU began rating members of Congress in 1971, and last year, began to take its highly touted Congressional Ratings program to state Legislatures to grade members who serve in the critical battleground states of Florida, Nevada, North Carolina, Ohio, and Virginia.  This was the first time the ACU issued ratings for Missouri state lawmakers, and recognition was given to only a handful of senators and representatives. The ACU based its ratings on lawmakers’ votes on a number of bills brought up during the 2012 legislative session that addressed important matters such as teacher tenure and education reform; initiatives promoting job growth, such as workers’ compensation and tort reform; protection from “Obamacare” mandates; and constitutional freedoms.Throughout her legislative career, Senator Cunningham has addressed the quality of education in Missouri and has endorsed measures that promote economic development and protect constitutional rights. She was the sponsor and champion of the Health Care Freedom Act (Proposition C), which was approved by 71 percent of Missouri voters in August 2010. Thanks to Senator Cunningham’s dedicated efforts, Missouri was the first state to pass a proposition that bars the federal government from controlling Missourians’ health care decisions. “I am honored to be recognized by the ACU for my work in the Missouri Legislature and my commitment to protecting our freedoms as guaranteed by the U.S. Constitution,” Senator Cunningham said. “Our nation was founded upon the notion of a limited government of, by, and for the people, as well as the principle that citizens should have every opportunity to prosper and pursue the American Dream, without undue intrusion from the government. I’m devoted to doing everything in my power to allow all Missouri businesses to flourish and create new opportunities for economic development and jobs. I’m also resolute in my perseverance of limiting the federal government’s interference in our state’s business, while promoting our God-given liberties and family values.”
Posted by Randy at 3:39 AM