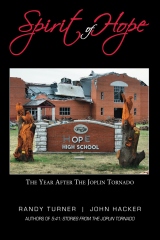 The Hope High School sign, which became a symbol of Joplin during its recovery from the May 22, 2011, will be a topic of discussion Tuesday when the Joplin Board of Education meets:

Superintendent C.J. Huff has expressed his commitment to preserving the sign, which he said has become somewhat of an icon in Joplin since the tornado. He recently said the primary challenge in moving the sign will be its size, as it extends into the ground nearly as deep as it rises above the ground.Steele said board members on Tuesday plan to discuss how to move the sign as well as where it should be moved, whether it be storage, the new high school or the Joplin Museum Complex.“We’ve had some people concerned about what we’re going to do with it and where we’re going to put it,” he said. “There’s a lot of options out there, and we just want to make sure we’re going to make the right decision.”Steele said the subject of moving the sign would possibly be a discussion-only item on Tuesday, without any formal decisions being made.“Whether a vote takes place, I don’t know,” he said.


Anyone have any thoughts?
Posted by Randy at 3:14 AM

Just leave it in place! Is it really in anyone's way right now? Rick Nichols.

As a native of Joplin and former student of Joplin High School, I personally think they should post the sign at the new high school and officially re-name the school Hope High School. I can't think of anything more perfect for the great community of Joplin.