Voice for Missouri public school teachers up for election Monday

The Democratic runoff election between Rep. Stacey Newman, a solid supporter of public school teachers and Rep. Susan Carlson is set for Monday. If you remember, the vote became necessary after a primary election in which Ms. Newman won by one vote. Ms. Carlson challenged the outcome. The following news release comes from the Newman campaign.

Newly sworn in House Speaker Tim Jones promised last week to lead  an attack on
Missouri teachers as one of his 2013 legislative priorities.  Jones, a Tea Party Republican,
believes that all educational woes can be attributed to teachers, regardless of poverty,
hunger, homelessness or other challenges our kids face today.  This is no joke. 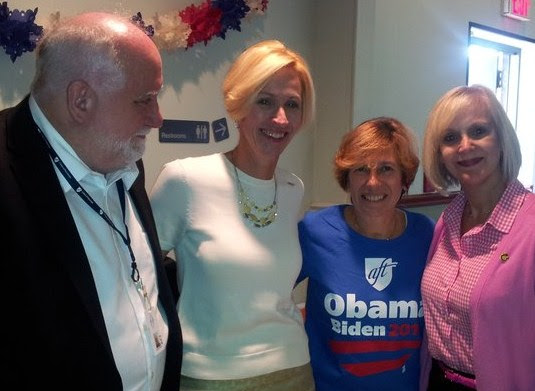 WE NEED MORE "PRO-TEACHER" LEGISLATORS, NOT LESS
MY OPPONENT?

SHE VOTED YES ON HB473 IN 2011. Expanding charter school sponsorship to
private organizations and individuals with NO state accountability - would have resulted in
further reductions in funding for public school districts. MIssouri ProVote says WRONG!
www.house.mo.gov., www.missouriprovote

RE-ELECT REP. STACEY NEWMAN - FOR US & OUR KIDS

"I've known Stacey for many years.  As a teacher who retired from Captain Elementary School
after a 30 year career in the classroom, I know full well the struggles educators face.  Lack of
funding and our children's various family situations often make it tough to have ideal learning
happen in schools.  We desperately need Stacey re-elected.  She stands up to those who
want to hurt, not help, teachers.  Please vote for her Monday, September 24th."
Mrs. Lee Rosen Scissors
Beloved 4th grade teacher

"State Rep. Stacey Newman works tirelessly, not only for our rights that are in jeopardy but for
students  and teachers too.  After serving on the University City School Board for 24 years, I am
honored my work continues on via the Lieberman Learning Center.  I know something about
educating kids.  I trust her as a legislator implicitly and stand with Stacey."
Joy Lieberman
Longtime  University City citizen