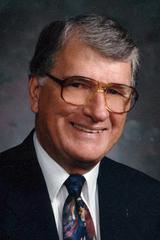 One of the worst days of my life came in October 1979 when Tommy Wilson, publisher of the Lamar Democrat and Lockwood Luminary-Golden City Herald came into our office on Lockwood's Main Street and told us Boone Newspapers was shutting us down.

I had been editor of the Luminary-Herald for 10 months after former Publisher Dennis Garrison brought me over from the Democrat, where I had been sports editor. I loved living in Lockwood and now my job had been eliminated.

But for a short moment, there was a glimmer of hope. Tommy turned to Donna Shaw, our advertising saleswoman and said, "Donna, we're going to take you to Lamar with us." Sure, I could go back to the Democrat. That would be great.


But then he looked at me and said, "Randy, we're not taking you," and looking back 34 years later, I am sure Tommy Wilson enjoyed that moment.

I found out later, as I made one last trip to the Democrat office on the Lamar square, that not only was I out of a job, but Wilson had no intention of paying me the $702.68 worth of mileage he owed me.

After he delivered that message, again almost gleefully, I walked out of the Democrat office, went a few doors to my right and stepped into the law offices of Edison Kaderly.

I arrived at one of the few slow times for that office and even though I had no appointment, Edison made time to see me and I told him my story. After I finished, he said, "I'm not going to represent you, Randy, but I am going to tell you exactly what to do." For the next several minutes, he outlined every step I should take and how I should react to any response Tommy Wilson might have.

When he was finished, I asked him what I owed him for his advice.

"You don't owe me a cent and I hope you take them for every cent you can."

I followed his advice and within a few days I received a letter from Tommy Wilson telling me how unprofessional I was and that I would never work for Boone Newspapers again. I really didn't care since the letter was accompanied by a check for $702.68.

And I had the last laugh on Tommy Wilson. After he and his boy editor Dave Farnham were practically   run out of Lamar in 1981, I returned to the Democrat, still owned by Boone Newspapers at that point in 1982 as managing editor, a job I held for more than seven years before leaving to take a job with the Carthage Press.

That $702.68 came in handy as I spent the next several weeks looking for work. And I had Edison Kaderly to thank for it.

I told a much shorter version of that story to Edison's son, Barton County Prosecuting Attorney Steve Kaderly, when I ran into him at a quiz bowl competition in Lamar last week. I am sure Steve has heard many such stories about his father, who died March 5 at age 87.

Edison was the last in a long line of giants who kept the little town of Lamar a pleasant and prosperous place to live. Mayor Gerald Gilkey, Tom O'Sullivan, and Edison were at the top of the list during the years I lived there and during the approximately two decades I covered the city for the Democrat and the Press.

Edison served the city for decades as a city councilman and city attorney and played a key role in the decision by city officials in the 1980s to give residents a Christmas without utility bills two different times. Nobody did that, as Paul Harvey pointed out when he included the story in his daily radio newscast.

Edison was also the driving force behind the construction of the Thiebaud Auditorium,

But the Edison Kaderly I remember most was the one I used to see each year at the Lamar Free Fair Queen Contest. For decades, Edison served as master of ceremonies for the event. His professional level work at that job, as well as the kiss he bestowed on the winner each year became a much-hallowed tradition in that annual event and something he did from the very first until he retired from the job just a few years ago.

During the years I covered the contest, I made it a point to talk to Edison each year and even on the times when I had written something that irritated him he was unfailingly polite and genuinely friendly. Edison Kaderly loved people.

Another Edison may have brought light to the world, but the one that I knew, the one who made his home town his number one priority, will always be a shining light for the city of Lamar.

Thanks for sharing your experiences Randy.