Small Town News back as e-book 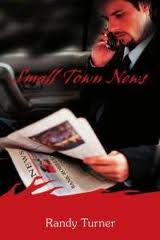 As of this morning, my first book, Small Town News, originally published in 2005, has been published in an e-book edition and can be purchased for $3.99.

For the past few years, some unknown reason IUniverse, the company which published Small Town News, has put out e-book editions of my second novel, Devil's Messenger, as well as my non-fiction works The Turner Report and Newspaper Days, but has not put out an e-book edition of the book that started it all, so I took matters into my own hands.

Small Town News was inspired by events that took place Oct. 31, 2001, in Diamond when the bank was robbed and the school superintendent, Dr. Greg Smith, disappeared on the same day. At first, media reports seemed to link the two events, though later it turned out there was no connection at all. Dr. Smith's body was found the following week, in his car at the bottom of a pond just outside the Diamond city limits. Newton County Coroner Mark Bridges eventually ruled that Dr. Smith committed suicide.
At the time, I was teaching current issues, a writing-intensive class, at Diamond Middle School. In one of my classes, we discussed the situation and I was surprised by the vehemence of the opinions students had about the behavior of the media during the whole situation. They were particularly disturbed by the way Dr. Smith's widow was treated and the scope of the questions with which she was bombarded. Almost 100 percent of the students thought the media should leave the woman alone.
The student comments got me thinking about writing the book, which is a fictionalized version of those events. The focus is on the media, as seen through the eyes of a student, a high school junior named Tiffany Everett who has a one-week internship with one of the three local television stations.Within the 196 pages of the book, the way the media handles news in a small town is scrutinized though the actions of the high school junior, her teacher, the television reporter to whom she is assigned, and the editor of the town's newspaper.

Small Town News continues to be available in paperback at Amazon.com and other internet sources and locally at Changing Hands Book Shop and Always Buying Books in Joplin and Pat's Books in Carthage.

(Note: The book cover pictured above is from the IUniverse edition and is not included in the e-book since I do not own the rights to the cover.)
Posted by Randy at 8:55 AM