Brattin: I will fight for law-abiding gun owners 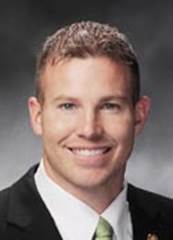 In his latest newsletter, Rep. Rick Brattin, R-Harrisonville, talks about panicked citizens buying up ammunition because they are afraid the federal government is coming to take away their guns. What Brattin fails to mention is that it is he and his fellow legislators who are ratcheting up the fear for their own political gain.
In recent weeks the attention of many law-abiding Missouri gun owners has been focused on a lawsuit filed by a Southeast Missouri man from Stoddard County against the Missouri Department of Revenue. Eric Griffin filed his lawsuit after he took issue with a new policy put in place by the department that required his personal information to be scanned and saved in order for his concealed carry endorsement to be added to his driver’s license. He believes, as do I and as do most Missourians, that our private information should remain private. Instead, his information was being sent to a third-party vendor outside the state, and the potential existed for that information to ultimately end up in a federal gun owner database.
I am proud to say the state legislature has responded quickly to this potential infringement on the privacy of Missouri citizens by taking the department to task. We had a series of hearings in the state Capitol where my legislative colleagues were able to question officials from the department on their current policies. They also made it abundantly clear that the state legislature will not tolerate any private information being shared with out-of-state parties. To reinforce that, I have joined several of my colleagues in filing legislation to remove any doubt law-abiding Missourians may have in regard to how their personal information is being handled.
Already, the Speaker of the House has said my legislation will be fast tracked through the legislative process. The bill (HB 859) would do away with the concealed carry endorsement that appears on a driver’s license and would allow anyone with an endorsement to convert it to a permit at their local sheriff’s department. It’s a change that would take the process away from the Missouri Department of Revenue and put it in the hands of local authorities who are here to protect our rights rather than violate them. It is a change that would ensure our private information remains private without being a major inconvenience for law-abiding gun owners.
I believe my bill represents a step in the right direction for our state, but I also see it as just one part of the bigger picture effort we must have to protect our Second Amendment rights. The overreaching actions of the federal government have scared law-abiding citizens into believing their rights may be taken away. We have seen ammunition shortages here in Missouri and across the country as a result of the panicked effort of law-abiding citizens to stock up on items they are worried the federal government will outlaw. As a state, we must make it clear that we will stand in defense of these rights – that we will turn back all efforts by the bureaucrats in Washington, D.C. to disregard and destroy the freedoms given to us by our founding fathers. It’s a fight I am proud to wage on your behalf, and on the behalf of all law-abiding gun owners here in Missouri.
Posted by Randy at 6:01 PM