Huff totally in charge of teacher evaluation methods; board votes to give up approal 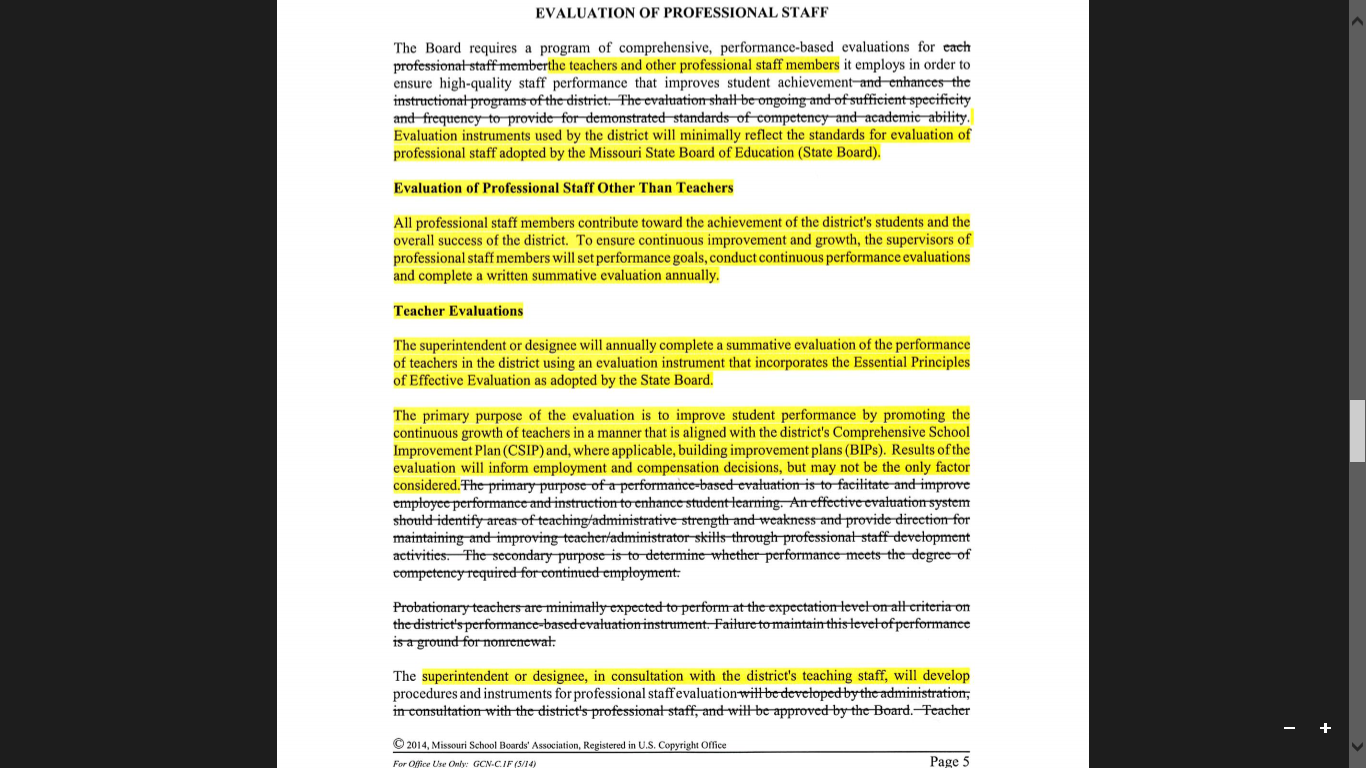 In an ironic turn of events, the Joplin R-8 Board of Education approved a resolution opposing Amendment 3 tonight because it would take away control from local boards of education, then later in the meeting, without a word of discussion, handed over all control of the teacher evaluation process to the C. J. Huff Administration.

Those who attended the meeting and those who watched it on Jet 14 or on the Turner Report never knew that was coming up for a vote because, like so many other important items, the change in board policy was voted on as part of the consent agenda.

In the past, teacher evaluation processes had to be approved by the board of education. Not any more. The changes, which were approved 7-0 by the board, now leave those processes Now it says "the superintendent or designee in consultation with the teaching staff will develop procedures and instruments for professional staff evaluation."

While this change slipped through and is now part of board policy, other policies which would have put the hiring and firing of non-certified personnel completely in C. J. Huff's hands and allow him to set salaries for administrative staff and were scheduled to come up for a second reading, were not included on this month's agenda.

The consent agenda, as noted in an earlier Turner Report post, contained over half a million in spending, as well as first readings about policies covering the teaching of religion and discipline reporting and records.

What's the use in having a board then?

The board provides the insulation and isolation

The board has one employee. That person is the superintendent.

I think it's tune for a rebranding of Joplin Schools to something more like: Joplin Schools, Inc. CEO CJ Huff sounds so much better.

The board has one employee. That person is the superintendent.

The board should be replaced. They should be lessening huffs power and acquire the services of a leader that can dig this district out of the black hole.

Make sure everyone is registered to vote for positions coming open in April. If enough people vote the "yes-men" off, things can change. I brought voter registration application forms to the School Board Meeting last night. ALMOST everyone in attendance was already registered, I'm still committed to getting more to register...especially the dissatisfied ones.

He isn't going to make nice with anyone! He's too much of a narcissist to think that everyone doesn't already see everything his way! If you don't, you're out! It's when we the staff, and the parents, demand better his reign of terror will end and not a moment before!