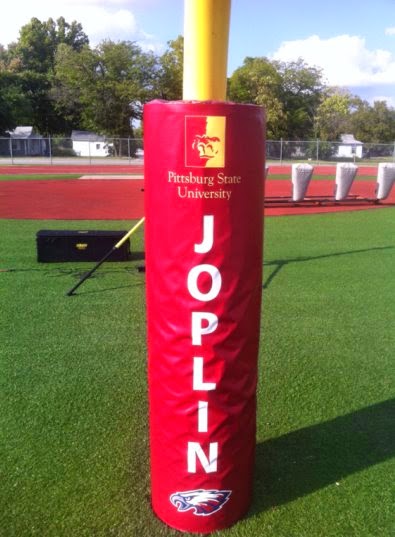 For someone who has spent far more time during his six years in office tending to public relations instead of education, Joplin R-8 Superintendent C. J. Huff seems to keep making one PR blunder after another.

Consider the infamous six-and-a-half-mile ribbon, the "might-as-well" spending, or the most recent fiasco, the initial decision, changed after a tidal wave of protest, to bus all elementary students to the October 3 cutting of that record-breaking ribbon.

And now C. J. Huff has done it again.

In whose universe, would Pittsburg State University be allowed to advertise on prime real estate at Junge Field, or wait is that at the Dewey Combs Complex at Junge Field or Soaring Passes Stadium?

This is not the first slap in the face to Missouri Southern State University that has occurred under Huff's watch.

Earlier this year, without telling the Board of Education (he doesn't even bother to wait for his rubber stamp any more), Huff arranged for a partnership with Western Governors University, whose chancellor is his former assistant superintendent Angie Besendorfer, which included reduced costs for courses. This despite the fact that Missouri Southern, which has been generous with its contributions to Huff's Bright Futures program, serving as a partner to both the high school  and East Middle School, also offers graduate and undergraduate level computer classes.

And then there was the $3 million grant the Joplin R-8 School District received from the federal Economic Development Administration for "workforce development programs" for Franklin Technical Center, which does many of its programs in conjunction with MSSU. At some point, R-8 officials hijacked that grant, and at this point, none of the money has been directed to any of the programs done with MSSU.

On the contrary, some of it was used to buy the jumbotron-type scoreboard that will be installed in the high school gymnasium later this year, something which the C. J. Huff Administration somehow convinced the federal government was going to be a boon for the workforce.

Now we will just have to wait and see if there will be an advertisement for Pittsburg State University, C. J. Huff's alma mater, front and center in the Soaring Dunks Gymnasium.

Isn't it nice how he's using Pitt State red instead of Joplin Eagles maroon too!! Way to go cj, you just pissed off another big group of powerful people! lol Idiot!

This article seems like a bit of a leap. I can't quite tell how much of similar articles are sarcasm or just pure disdain for CJ Huff.

I'm not a fan of the "might-as-well" spending, or the seemingly inappropriate relationship with WGU. Are the bussing, ribbon cutting, and goal post advertising really worth mentioning in grand scheme of things or just a way to perpetuate a vendetta?

I'm much more concerned with the "might-as-well" spending and additional 4M in interest we'll have to pay. I don't know if anyone is really going to be upset about a Pitt State goal post.

Get him out .. C J Huff killer of Joplin. And u idiots just complain. He spent money. A lot of money on a ribbon that say "mission accomplished". I may not be a genius but isn't something suppose to be finished first. Omg Joplin in a joke

You can't even make out what the logo is on the goal post from the stands... and MoSo has a huge banner located at the main gate of Junge as well as a banner on the Joplin Schools website. This is being blown out of proportion. And FYI, Joplin's school color isn't maroon, it's cardinal. Which is the color of the pad.

MSSU is a joke so the focal point of this means nothing to me. Or was that just to draw attention? Look at how Joplin handles everything and believe me CJ Huff is just like the rest of the jokers who have anything to do with big money in Joplin.

7:15 bright red is not a JHS color, sorry to inform uou. Cardinal is a Webb City and Carl Junction color. I challenge you to match any athlete uniform to that goal post pad. Let us know how that works out for you. Lol