Joplin Globe columnist: Is it OK to call Obama a monkey? 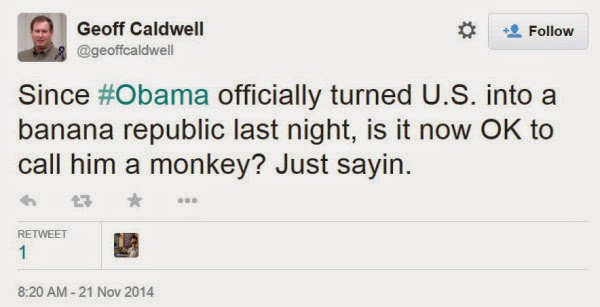 A few years ago, Joplin Globe Editor Carol Stark came up with the brilliant idea of hiring bloggers  to beef up the newspaper's online presence.

The Globe hired a couple of conservative bloggers, Anson Burlingame and Geoff Caldwell, a liberal blogger Duane Graham, a few others who wrote considerably less often and for a short time, provided infrequent blogs from Carol Stark and Globe reporters Wally Kennedy, Joe Hadsall, and Scott Meeker, if memory serves me correctly.

For the most part, the Globe blogs were read by the Globe bloggers themselves who wrote the lion's share of the comments. Finally, the experiments were dropped. The bloggers continued their blogs on their own, however, and for some unfathomable reason, Stark decided to continue to use Burlingame and Caldwell to provide regular "guest columns" for the newspaper.

On this blog, I have frequently written about Anson Burlingame's hero-worshipping articles about Joplin R-8 Superintendent C. J. Huff.

Now, Caldwell may think he can get away with this obviously racist tweet because of the “banana republic” reference, but he and I both know better. We’ve been down this road before.

I am sure the Joplin Globe will continue to litter my lawn with Caldwell’s columns on Wednesday mornings in an effort to more widely distribute the advertising that is stuffed into that edition, as well as to pick up new subscribers. But I am also sure that as long as my local paper publishes a column by a pedestrian writer who calls our first African-American president a “monkey,” I will never again be a subscriber.

By the way, for those of you interested in expressing your displeasure to the Joplin Globe, the phone number is 417-781-5500. If you want to make a written complaint to the Globe’s parent company, Community Newspaper Holdings, Inc., here is a link to its site: http://www.cnhi.com/general-inquiries/
If Carol Stark's best ideas for columnists are Geoff Caldwell and Anson Burlingame, and her newspaper continues to ignore major Joplin stories, is it any wonder that the Turner Report has been able to find a receptive audience?

***
In Scars from the Tornado, former Joplin East Middle School teachers and students tell the story of the May 22, 2011, tornado that destroyed one-third of their community and their school building and how they moved into a warehouse and turned it into a school. A story of tragedy and triumph written by those who lived it.