The Ferguson riots and the impotence of Governor Jay Nixon 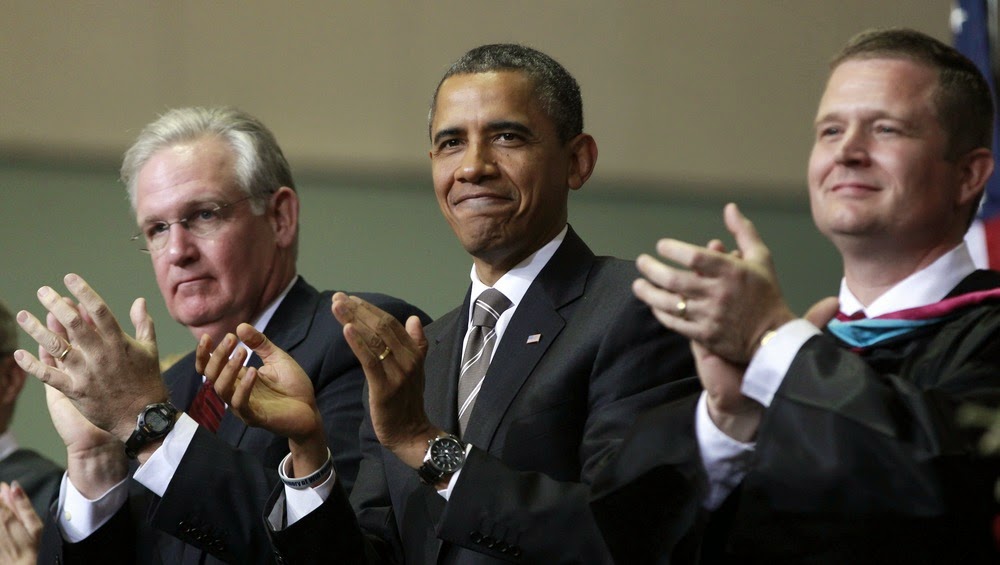 Only a few hours have passed since Prosecuting Attorney Robert McCulloch announced that a grand jury had found no probable cause to charge Darren Wilson, the police officer who shot and killed Michael Brown.

As dawn breaks in Ferguson, Missouri, some businesses have been burned to the ground, others left with smashed windows and stripped of merchandise. The evidence of the mishandling of the grand jury announcement is there for the world to see.

As is the evidence of the impotence of Gov. Jay Nixon.

With video of the devastation in Ferguson playing on every morning news show, it is hard to remember that there was a time, not too long ago, that some national pundits were touting Jay Nixon, who is prevented by term limits from running for re-election, as a potential vice presidential candidate.

Some even saw a path to the presidential nomination for Nixon should Hillary Clinton decide to forgo a 2016 candidacy. After all, Nixon is a Democrat who was easily elected to two four-year terms as governor in a state in which two-thirds of the legislators are Republicans. This followed four four-year terms as attorney general.

For those of us who live in Joplin, Nixon's performance in the wake of the May 22, 2011, tornado will not soon be forgotten. He came here immediately after the tornado and has kept returning to this day, even though the staunchly Republican Joplin area voted heavily against him in November 2012.

One week after the Joplin Tornado, many of those who attended the memorial service at Missouri Southern State University for the 161 victims or watched it on television or online felt that it was Nixon, not President Obama, who delivered the most powerful speech.

When it came to Joplin, Nixon did everything right.

That was not the case with Ferguson.

When disaster hit Joplin, Nixon was lightning-quick to the area. Ironically, the day after Michael Brown's shooting, when the first wave of violence swept through Ferguson, Nixon took the time for a leisurely walk-through with Superintendent C. J. Huff at the newly-opened Joplin High School, which replaced the building that had been destroyed in the tornado.

He then stopped at another Joplin School District building and gave an impromptu speech at a meeting of the district's first-year teachers.

It took three days for Nixon to arrive in Ferguson.

By that time, the battle had already been lost.

Since then, he has compounded his initial missteps. He announced several weeks ago that he was forming a committee to study the Ferguson situation and offer solutions, but then failed to appoint the committee until late last week.

When a reporter asked him last week where the buck stopped, the governor of the state which gave this nation President Harry S Truman awkwardly paused.

He had no idea.

That became obvious Monday when Nixon was unable to talk the St. Louis prosecutor out of the ill-conceived idea of releasing the grand jury's decision at 8 p.m. We have no idea if he even tried. After making a big deal during a press conference last week of calling in the National Guard, the governor failed to send in enough troops to protect property from arsonists and looters.

At a press conference a few hours before the grand jury announcement, a reporter asked Nixon if he would be in Ferguson that night. Nixon indicated he would be.

For all of the good he did, he might as well have returned to Jefferson City and watched the Ferguson horrors on TV.

Or maybe he could return to Joplin and remember the days after the tornado when he could still see a national political campaign on the horizon.
***
Subscription Offer- Hard-hitting news and commentary you won't get anywhere else in Joplin. Keep the Turner Report/Inside Joplin growing with a subscription. The button is on the upper right hand side of this page. The cost is $1 per week, $3 per month, or $30 per year. If you do not want to use PayPal or a credit card, you can send a check to 2306 E. 8th, Apt. G, Joplin MO 64801. Thanks.
Posted by Randy at 4:23 AM

He came here immediately after the tornado and has kept returning to this day, even though the staunchly Republican Joplin area voted heavily against him in November 2012.

My "staunchly Republican" family was seriously considering voting for him in 2012 before he zapped a voter ID measure. In general, we were not terribly displeased with him until Ferguson; a key action instead of inaction there was his calling for the prosecution of Wilson, and this from the former Attorney General of Missouri.