Nixon on Ferguson: No one should have to live like this 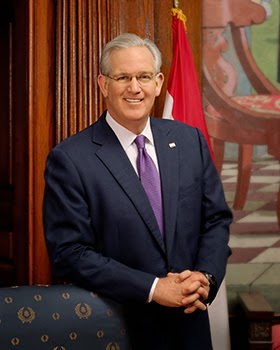 Below are the prepared remarks made by Gov. Jay Nixon during a media availability today at the University of Missouri-St. Louis with state and local law enforcement leaders, and with leaders from the Missouri National Guard:

“Good afternoon and thank you for joining us. First let me introduce who is with me today:
Chief Dan Isom, the Director of the Department of Public Safety
Colonel Ron Replogle of the Missouri State Highway Patrol
Chief Jon Belmar of the St. Louis County Police Department
Assistant Chief Al Atkins of the St. Louis Metropolitan Police Department
We’re also joined by Major General Stephen Danner and Brigadier General Gregory Mason from the Missouri National Guard.

“I am deeply saddened for the people of Ferguson who woke up this morning to see parts of their community in ruins.

“I just came from West Florissant, and it’s a heart-breaking sight. Seniors afraid to leave the house. School canceled. Kids scared to go outside and play.

“What they’ve gone through is unacceptable. No one should have to live like this. No one deserves this. We must do better and we will.

“This morning and into this afternoon, I met with Guard and law enforcement leaders. All agree that the violence we saw in areas of Ferguson last night cannot be repeated.

“That is why, in order to protect lives and property, we are bringing more resources to Ferguson and other parts of the region to prevent a repetition of the lawlessness experienced overnight.

“The National Guard presence will be ramped up significantly in Ferguson and ensuring they are ready to act quickly to prevent violence.

“First, we are deploying hundreds of additional Guardsmen to Ferguson who will be stationed throughout the community to protect homes and businesses.

“With these additional citizen soldiers, law enforcement officers will be better able to focus on protecting lives and property in the community.

“The Missouri National Guard will also continue to provide security at critical locations, including the Ferguson Police Department. Last night, more than 700 Guardsmen were at nearly 100 vital facilities throughout the region, and I thank them for their work. It is a testament to the professionalism of local law enforcement, the Missouri State Highway Patrol and the Guard that no one was killed or seriously injured last night.

“Third, the Guard’s rapid response teams will be positioned so that they are ready to act at a moment’s notice if challenges arise. Altogether, there will be more than 2,200 National Guardsmen in the region.

“Lives and property must be protected. This community deserves to have peace. We will provide safety and security to this region.

“I know this morning there is pain in the hearts of this community. I also know that it is vital for us to understand how we got to this place, and how to make it better.

“I continue to be heartened by the steadfast work that so many people in this region are doing on behalf of peace and understanding, to avert violence and to move forward together. Thank you.”
Posted by Randy at 2:03 PM

And governor, explain why you said at the beginning that you wanted a "vigorous prosecution." Since two were involved and one was dead and that only left the police officer. A "vigorous prosecution" would have been the police officer. A remark like that would inflame the situation and would have been a outlandish rush to judgement and did nothing to calm the situation.