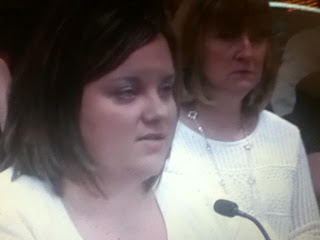 By a 3-2 margin, the Joplin R-8 Board of Education rejected a $100,000 plus contract with the Core Collaborative, an outside consulting firm.

The district had already paid $103,000 to Core Collaborative for the 2014-2015 school year, and Curriculum Director Sarah Stevens made a jargon-filled plea for another year, saying that the district was just getting started with Collaborative head Paul Bloomberg's work on visible learning. "It's still new to us," she said, and she stressed how important it was to have "outside people come" to Joplin and work with teachers and principals.

It was noted that Stevens is going to be presenting at a workshop being put on by Core Collaborative, in which she was going to tell about Joplin's first year experience with the group and what it expected to accomplish during the second year.

Board President Jeff Koch asked Stevens if she would be able to provide the training. Stevens said that while professional development "is my passion,"  she had too much to do to be able to do that.

Koch, Debbie Fort, and Jennifer Martucci voted against renewing the contract with Core Collaborative, while Mike Landis and Lynda Banwart voted to retain the consulting firm.
Randy Steele was absent.

The vote against Core Collaborative came despite Stevens' efforts to use the same tactics she used last month when she convinced the board to spend $300,000 over a three-year period for a new testing regimen, which will expand the district's practice standardized tests to kindergarten through second grade.

I will be taking the Core Collaborative contract to the board on Tuesday, May 26.
I am asking for a year long contract up to 30 days to include the days principals have asked for, departments have requested, and to finish helping with the bsip plans we have started and the work of self regulated learning. I will be also be including a couple of days for special ed iep work.
This is the same amount of days we used this year between three consultants with the Core Collaborative.

I would like a short blurb from you stating how the work we have embarked on this year with the core collaborative and visible learning has helped, guided, or changed the way your building is working together, performing, etc. If you feel inclined, include what you hope to gain from continuing this focus and support.

Please do not use the verbiage of Visible Learning since that technically was with Corwin, even though Paul (consultant Paul Bloomberg who heads the Core Collaborative) tied a lot of what we were doing all together to make it all fit. I will bring Visible Learning for Teachers to a different board meeting if JPDT votes to have it happen this summer.

I am hoping to provide a presentation to avoid the interviews and length of the last action item, but your visible support at the board meeting is always appreciated.
Posted by Randy at 7:36 PM

The price of the now defunct Bloomberg for a year? $103,000. Sarah's face as she was leaving the table? Priceless.


Score one for the little guy. Now let's hope they don't squander that money on something equally stupid.

Inquiring minds want to know who was, or is, picking up the tab for Sarah's little self-promotional trip to sell Bloomberg at his conference? She markets him to every district possible, and was going to continue this at his conference. Is she getting a piece of the pie? We'd like to know that, too. You can also bet she won't be traveling alone. They always travel in packs. It's more fun going to the bars that way on these "school" trips.

Jargon is all these people have to use. They don't have facts, data, or experience. Just jargon. It's how they justify the jobs they have for which they are not qualified.

This was the best thing that happened at the meeting. The lady presenting mrs. Stevens, not once mentioned any results from last years 100,000 spent. When Dr Fort ask her about her upcoming speaking engagement I was floored. She was obviously personally invested in this program and perhaps financially. This type of conflict of interest by CJ Huff and his administrators has to stop. No Bright Futures, no consultants. Invest in the people you have and maybe teacher retention will improve.
Landis mistakenly provided the best reason to put Mr Kimbrough on the board. He said Mr Kimbrough supported The recently elected Board members. Think about that, he is not only the most experienced Board member but he had the same beliefs as the majority of R8 voters. Also Mr Koch had a great point that whoever is elected to fill the vacant seat could have an unfair advantage in the next election. Kimbrough makes the most sense.

@ 8:36 and to Jeff Koch? How is having 10 months experience on the board, "giving an unfair advantage?" Do you receive extra votes in the election? NO!
Do you have a more experienced candidate, who you now know where the hell they stand, to choose from in the election? YES!
Dopey statement from a man I thought was more intelligent. ( meaning KOCH, not you 836!)

There were some "Eeyores" (people who spread nothing but discouragement and depression) confidently predicting nothing has changed and that this would fly through the new board.

While I don't expect them to stop commenting, hopefully this and future "not business as usual" actions will prompt people to not pay attention to them.

Did you ever stop to think in your moment of pomposity that those comments might have been based on observation (re: the assessment vote) and might have served as a warning to those voting? Trust me, they read what we write here, just like you do.

Just what all have they piled on their teachers this year? Visible learning appears to be different from what this was about. Then we've read about assessments and curriculum. New buildings and schedules. We've read about everything but raises and benefits for staff. It's no wonder we have so many applicants from Joplin for every opening. Shameful management. I would not want to teach in Joplin. The teachers of Joplin should publish a list of all of the things they've had to do in the last few years. The public needs to know what is interfering with their children's progress. Teachers can only do so much at any given time, and this appears to be ridiculous. Maybe that is where Joplin's collective bargaining should start, as it doesn't look like there is much money to be shared without some massive layoffs somewhere.

I'm not sure Ms. Stevens was totally honest about mentoring last night. I mentored FIVE new teachers this year. I got paid the same I formerly got for ONE new teacher. I did not get $100 a head, and it was not particularly one whit easier than it ever was. It took hours and hours of time. We were told by our TLC that this was the way DESE wanted mentoring done, but we took that for a lie, as we do about all that she says. What we figured was that this was one more way to save money by sticking it to the little people, which is business as usual. In the meantime, they are laying off custodians and keeping their shortened school year so they don't have to pay out so much for classified staff. We all remember these things when we see Whitney Warren, the TLCS (who have little to do these days, it would appear), and all of the other unnecessary employees that CJ has purchased at the cost of others. Maybe the custodians' wages are being used to pay for Sarah's assistant? In my opinion, having watched one of my "superiors" lie to the BoE, I would start with cutting her job and redistributing the wealth amongst the classified employees.

I am not sure the last time Ms. Stevens was honest about anything, for example, leaving McKinley School at certain times daily to go and get her child and then not being accountable at either McK or Royal Heights at anytime afterwards. Or better yet, her showing up daily around 830, when all other contracted teachers were required to be there at 7:30. Ms. Stevens, also may be a man. Ahem, she also is the same one who did a "anonymous" survey, and then ripped it up in front of her committee because it was "too negative". A lot of good that survey did. Which would allow me to say that is the way the R-8 has done a lot of things. If it does not suit them or agree with them, they simply "get rid of it". They have lost a lot of good people with this philosophy. She is worthless as an educator, she was an awful librarian, even worse TLC, and now they have allowed her to be curriculum director and when you thought it could not get any worse with Ms. Hart, um, it did. There are a lot of current admins very nervous about their jobs. Why you might ask? Because they are now going to be held accountable for low test scores. Obviously Huff is nervous as he was quoted in the JG stating "there is no need to go off and start firing teachers, admins, and the Supt.", but CJ, why not? It did not seem to be a problem when the Reign of Terror Bessie was there? So now that it might be you and your buds, you are getting pretty nervous. And you should. There is an exit plan and it is being worked on right now. Karma is a bitch CJ.