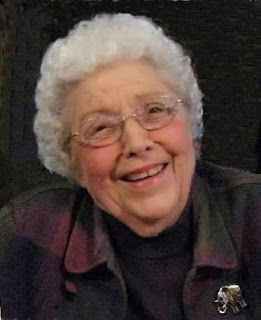 It was shortly after I became managing editor of the Lamar Democrat in 1982 that I met her for the first time and she was not at all what I expected.

The Democrat office manager Opal Sims called back to my desk and said, "Lou Rix is here to see you."

I had never met Lou Rix before, but I had certainly heard her name ever since I had returned to the newspaper where I had worked as a sports editor in 1978. From everything I had heard about her around the office she was the meanest, most evil person ever to live in Barton County.

From what I had been told, she kicked puppies and put extra wax on the lunch room floor at the senior citizens center just before the noon meal.

Imagine my surprise when it was not some monster, but a little old lady who stepped into the newsroom. (And at that time, she was three years younger than I am now. It is amazing how age changes your perspective.) There were no horns protruding from her gray hair.

After three decades, I have no recollection whatsoever of what it was she wanted to talk to me about during that first meeting, but I remember enjoying the conversation.

I couldn't figure out why it was that my boss described her in such a fashion, but after a little research it became evident. After the death of her first husband, Lou Rix became involved in Lamar city politics fighting what she perceived to be conflicts of interest among the city council members, the City Attorney Edison Kaderly and long time mayor Gerald Gilkey. She ran unsuccessfully against Mayor Gilkey and battled the Gilkey Administration at every turn.

By the time I talked with her in late 1982 or early 1983, she was already heavily involved in Republican Party politics and she had cultivated a wide range of friends in the GOP, including John Ashcroft and Sen. Richard Webster. From that time on, though she was always wary of my boss, Publisher Doug Davis, who eventually stopped covering the Lamar City Council and ran for an open seat, was elected, and became a reliable vote for the Gilkey Administration, Lou Rix and I always got along well.

She regularly called with ideas for stories, mainly about politics, but also on other things that were going on in Lamar and Barton County.

What I remember most about Lou Rix, who died last week at age 89, was the gracious help she offered to the teenage reporters who worked for me. When Kari Wegener and Peggy Brinkhoff did an investigative series on conflicts of interest facing businessmen who served on city councils (I was never one to have young reporters working on puff pieces), Lou provided much of the information about why it was a problem. Her help enabled the teenagers, both of whom were high school seniors, to become the youngest reporters to win an award at the Kansas City Press Club, when they received first place in general reporting.

A couple of years later, Lou took another teen reporter, Cherie Thomas, a Liberal High School senior, under her wing when Cherie was covering a story with a major impact on this area- the funeral of Lou's friend, Sen.Dick Webster.

Not only did she provide Cherie with quotes about the senator, but helped her find others who could give her insight into Webster.

I kept in touch with Lou, who had married Dick Scroggs, for many years, and in fact, during the first few years of the Turner Report, especially from 2004 to 2006, she helped me with my coverage of the collapse of O'Sullivan Industries, as well as scandals involving state license fee offices.

Lou Scroggs helped play a major role in changing Barton County from a Democratic stronghold, which it was during the time of Democrats such as Gilkey and Kaderly in city offices and an almost completely Democratic group of officeholders, to an all GOP county government.

I am sure there are still some people in Lamar who never forgave her for her vocal opposition to the elected city officials in the late '70s and early '80s.

But even they would have to admit- Lou made a difference.
Posted by Randy at 9:08 PM

Thank you for posting this! She was a great woman and someone that will be very missed.