The game that Mike Landis is playing 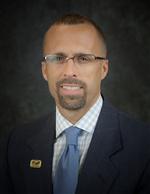 If any comment ever revealed the character of a man, it is that one by Joplin R-8 Board of Education member Mike Landis, who submitted his resignation Thursday.

Landis made the remark during a discussion over who should be appointed to replace Dawn Sticklen on the board last summer. The board asked for applicants and four- current Board President Jeff Koch, Shawn McGrew, Lane Roberts, and Jennifer Martucci, applied.

Why they bothered to take applications was never clear since Martucci and Roberts were immediately eliminated from consideration because they, unlike Koch and McGrew, had not run for the board in April 2014.

When it came to Koch, who placed fourth out of seven candidates, and McGrew, who finished hundreds of votes behind Koch in sixth place when Jim Kimbrough noted Koch's greater numbers during the election, Landis barked, "Elections don't matter."

In his self-serving resignation letter and in media interviews, Landis decried the politics that have entered the board of education since the election this year of Koch and Martucci and the election last year of Debbie Fort.

Of course, to Landis, it is only politics when someone is not doing what he wants them to do. The days of 7-0 votes for whatever Superintendent C. J. Huff wanted vanished when three people were elected on platforms of fiscal responsibility and improved academics, and since Fort, Koch, and Martucci were each the leading vote-getter in their respective elections, it is obvious that their positions on those issues resonated with the voters.

But that doesn't matter to Landis, because elections don't matter to Landis. When the people disagree with him, it is because they are an out-of-control mob, being spurred on by rabble rousers. It has nothing whatsoever to do with overspending and declining test scores, because C. J. Huff has explained that you can't believe what is written in black and white. He knows the truth and Mike Landis has backed him every step of the way.

Sources close to Landis (and his media interviews) indicate that his resignation, coming immediately after the resignation of Randy Steele, has been done in a calculated effort to strip Koch, Martucci, and especially Fort, who he has privately (and publicly) disparaged and who he allowed to be bullied by Huff during the April board meeting of their advantage and shift the balance of power back to those who support the way Huff runs the school district.

Landis has every reason to believe that the County Commission, a body he would dearly love to join sometime in the near future, will appoint three members to go along with Lynda Banwart and form a majority that will have control of the appointment of the new superintendent.

And not that anything like this could ever happen, but there is no law that would stop the County Commission from appointing one or more of the ones who resigned. And there would be nothing whatsoever to stop the new board from appointing one of the people who rose to upper administration during the C. J. Huff years as the new superintendent.

For that matter, there is nothing to stop the board from asking C. J. Huff to reconsider his retirement, which he could probably be talked into doing since obviously it would be "for the kids."

The key, obviously, is Lynda Banwart. Banwart has said publicly that she will not vote for Jim Kimbrough. Three hundred notarized signatures on Kimbrough's petitions mean nothing to her and neither does the fact that the people who voted for change with Fort, Koch, and Martucci want Kimbrough back on the board to be a part of that change.

Banwart's answer Tuesday night was her assertion that she knows more about "change" than the people who are wanting the change and that she (Banwart) is an agent of change.

Landis reportedly also is counting on Banwart's connection with the County Commission to steer the commissioners away from choosing anyone who would be approved of by the people who voted in Fort, Koch, and Martucci.

That makes tonight's 5 p.m.R-8 Board of Education meeting critical. The resignations of Landis and Steele have not been accepted by the board. They will make one last effort to appoint a replacement for Lane Roberts. If they are successful, then the resignations of Landis and Steele will be accepted and the board will be able to appoint replacements at an upcoming meeting and get down to the business of righting a ship that has veered dangerously off course.

If Banwart holds up the process by refusing to appoint a new member or fails to show up, that would be a clear sign of contempt for those who put her into office, under the impression that she, too, would be part of the change.

Whether that member is Jim Kimbrough or not, the local school board needs to be the body that makes the appointment, not the Jasper County Commission.

Elections do matter. Mike Landis may never realize it, but hopefully Lynda Banwart does.
Posted by Randy at 11:10 AM

In Mexico we refer to him as "El duche."

I believe there is a word for when one person has the power to override the will of the public...dictator.

We have not seen this much power vested in one individual since....well, our outgoing Superintendent.

Truth is stranger than fiction

What's the issue with the commissioners appointing the 3? I would think that would give the 3 "anti-Huff" folks an out. They can say they were a neutral party and don't have an agenda and then people couldn't complain about the new members because they didn't pick them.

I looked up "contemptuous" in the dictionary, and this little guy's picture was right there.

If they succeed in this gambit, their choices for a new superintendent will pretty much be limited to "one of the people who rose to upper administration during the C. J. Huff years".

Elections will most certainly matter next April, when all the replacement board members will be up for reelection. If that election goes like the last two, a superintendent in the mold of Huff would be shown the door soon afterwords, so who would want the job for less than a year, other than those who will be let go under a superintendent with a mandate to clean house.

11:40 AM: I don't see the "anti-Huff 3" wanting an out, I see them as wanting to fix the terrible problems with the district. If they wanted to play life on the easy setting, they wouldn't have run for the board in the first place and subjected themselves to all the attacks they've received from our betters.

Pretty sure that a lot of prayer has gone into the latest board machinations.

This guy Landis looks like a solid number two kind of guy. Not a school superintendent type, but the guy who is right behind the superintendent.

They are hiding a lot to go to this much trouble for local politics. They obviously aren't doing this out of concern for the education of the students, because they sat on their butts and watched this district slide into an abyss for seven years and did nothing to stop that slide. This is about someone wanting power, wanting to keep others from understanding what they're doing, and wanting to avoid accountability. Isn't it sad to see the ever pious Lynda become a part of this, even for her husband? Time to head for the confessional. Not sure if Landis has a soul, but if so, maybe she should take him with her.

I wonder who thought all this up? Landis isn't that smart. Huff? He's none too bright, either. Someone who has a lot at stake and no ethics. Hmm. Woolston? He's been sticking his nose in Joplin school politics for some time, and he doesn't live in Joplin. What would be his motivation for that? There is a sickness in this town, and it appears to be contagious.

And while all these people continue to play games, what happens in the meantime? My child starts high school next year in the midst of all this chaos. Can't be a good learning environment. I keep hearing all these maybe's. Maybe this will happen, maybe that will happen. I want to know what's being done right now in preparation for the upcoming school year!

Yes, because for a board member to be a 'no-show' (sick family member) just to prevent specific board actions from taking place would be such a shock. This surely hasn't happened before (like just a month or so ago), has it? lol

Wow 3:06 - let's discuss a myriad of other ploys of dysfunction that Huff, Landis, Banwart and others have thrust upon the voters and students of Joplin...really, it's a game and all of the players are playing...

And now 1967 raises it's ugly head. The Statute throwing the election to the County Commission was passed before the school consolidation and back then each school district was within the contiguous territory of only one county. Now, we are going to have a Kentucky Windage situation because the Joplin School District is physically within Newton County. Now, this brings us to the logical conclusion of the only avenue left is for the State to take over the School District. Based upon the unpaid construction bills of the District, that might just happen anyway. I will remind you of the State Action against McDonald County School District fifteen years ago when the State forced the District to raise the school tax levy. It will probably happen here too.

And the reasons to leave Joplin grow.

Rule or ruin seems to be the coalition's motto.

It's at least a year too early to leave unless you really have to. We can judge by the last two that that elections are still clean, so no later than April we can start fixing things.

Goodness Mikey! You always were a "take my toys and leave the sand box" kid in school. I knew THIS would happen before you even ran for the office. NOT A BIT SURPRISED

Kimbrough should be on the board in my opinion :) and Mikey Landis should be in prison with his corrupt brother, I'm sure he had his hand in the money pot as well, lol candy snatcher lol

Take a close look at the landscaping bids for East. I'm sure there are other bids that have a fake company name that belonged to Landis. Easy to submit a winning bid when your committee is in charge of facilities and construction. A man who will steal from the family business will think nothing of stealing from the public.