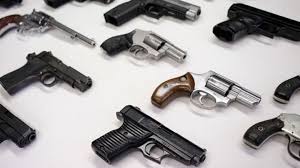 (The Missouri Legislature continued to waste its time solving problems that do not exist during the veto session, pushing through legislation for photo voters IDs to prevent non-existent fraud and continuing to expand gun rights beyond any reasonable semblance of sanity. In other words, it was business as usual. The following news release was issued by Republican members of the House, all claiming it as their own.)

General Assembly members participated in a historic veto session yesterday as the totals number of overrides made Governor Nixon the most “overridden” Governor in Missouri history.

Senate Bill 656 received the most attention during this veto session. As the session ran into the evening the Missouri General Assembly took up and approved to override the governor’s veto of legislation that allows Missourians to carry a concealed weapon without the need for a permit.

The bill will allow any person to carry a concealed firearm anywhere that isn’t expressly prohibited by law. The bill is meant to build on the constitutional change made by Missouri citizens in 2014 that allows Missourians the right to permit-less carry. You need to understand that this only applies to carrying within the state of Missouri. Should you travel to another state that requires a permit for carry, you will need a permit not to be in violation of that state’s permit laws.

It also will ensure that individuals who do want to obtain a five-year concealed carry permit will not be charged a fee in excess of $100. The bill will specifically prohibit additional fees that may be charged, including any fee for fingerprinting or a criminal background check. Additionally, the bill will allow Missouri citizens to obtain 10-year, 25-year, or lifetime permits for $200, $250, and $500 respectively.

The legislation also contains a provision commonly referred to as the “Stand Your Ground” law. The measure will remove the requirement that a person who is any place they are legally allowed to be can use force without retreating first. The bill will also expand the state’s castle doctrine law. Current statute allows individuals to use deadly force to defend themselves and their property against intruders. The bill approved by lawmakers will extend the protection against lawsuits to house guests who use deadly force.

I personally highly recommend that every individual gun-owner get training that not only includes how to handle the firearm, but includes state and federal laws affecting firearm use.

Legislators are placing a significant amount of personal responsibility into the hands of Missourians who carry.

-Photo ID, House Bill 1631, was the first issue to be taken up by the House. The bill would implement a system of voter identification in the state if Missouri voters approve a constitutional change that is on the November ballot. It will appear as Constitutional Amendment 6, and I have provided the actual ballot language below.

If the constitutional change is approved by voters, Missouri will then implement a system of voter identification. The bill that now becomes law would require voters to present a specified form of identification in order to vote in a public election. Valid forms of identification would include photo IDs issued by the state, the federal government or the military.

It also would require the state to pay for individuals to obtain a valid ID if they do not have one, or to obtain documents necessary for an ID. Additionally, the final version of the HB 1631 contains a provision that would allow a voter without a valid photo ID to vote with a regular ballot by showing another form of identification.

Supporters of the change say it is vital to prevent voter fraud and protect election integrity.

Constitutional Amendment 6; Official Ballot Title: Shall the Constitution of Missouri be amended to state that voters may be required by law, which may be subject to exception, to verify one’s identity, citizenship, and residence by presenting identification that may include valid government-issued photo identification?

-The Governor’s veto of House Bill 2030 also was overridden. This bill is meant to support and encourage employee-owned businesses. It creates a 50 percent income tax deduction for business owners who sell at least 30 percent of their companies to their employees.

=Similar to legislation enacted in states like Nebraska and Iowa, the legislation is designed to give owners an incentive to keep their businesses in Missouri rather than sell them to out-of-state interests. In addition, the legislation will give employees greater stake in the operation of the company that employs them.

-Legislators took up legislation that protects livestock owners from excessive liability. Senate Bill 844 was approved to clarify that an animal owner is liable for damages done by the animal to another’s property only if the owner has been negligent. Currently, if horses, cattle, or other livestock break through a fence and cause damages to another’s property, the owner is strictly liable. Even in cases when the fence is torn down or broken by someone else, the owner of the animals is still liable under current law. The change approved by the General Assembly will relieve the animal owner from liability for damages when the animals were released because of the actions or fault of another.

-Link to this webpage to read an entire list of veto overrides: Journal of House Proceedings September 14, 2016.
Posted by Randy at 8:04 PM

Sorry, leftist buffoons! This is just the first two results, of many to come, that will get you nice and triggered. Just wait til Nov. 8th!

Do you not know of any people that should not carry because of demeanor, ignorance, lack of training, or numerous reasons? The Missouri legislature just opened hunting season on right wing redneck wannabe cops. Just a matter of time before white crackers are getting shot over traffic violations, when the cop thinks he's reaching for his weapon. Hopefully, with all the rednecks carrying, the cops can reduce the killings of blacks without weapons.

Insofar as 10:08 pm is cooncerned, I sure hope that someday he needs a gun to protect himself from robbery, rape and/or murder and doesn't have one handy to protect himself. Those of us who have guns don't need to rely on a cop who is never around when you actually NEED one of the blue-shirted bastards.

I can't think of a better way to weed out the gene pool here in Redneckistan.

You people need to put your big boy pants on and get over it. Or just head to your liberal safe zones and STAY THERE.

I wouldn't go that far, he does admit somewhat effective self-defense in your home is valid ("somewhat" because you shouldn't be able to use an "assault weapon" for that, 10+1 rounds should be enough for anyone facing any number of home invaders). Everything else, including defense of self and family outside the home, is "unnecessary".

For all the others suffering from PSH, note that Kansas has had Constitutional Carry for a year and a half, without, you know, Dodge City becoming "Dodge City". If in that period you haven't thought twice of moseying over there, then don't worry about it coming to Missouri in January.

As for Voter ID, if you respect people's votes, then why don't you respect their right for them not to be diluted by fraudulent ones? It's only unnecessary to the extent democracy is unnecessary.

Randy is no different than the liberal mainstream media that no one trusts anymore.

Stick to the facts, not your unnecessary biased comments. You complain about the Globe..... you should remain neutral.....

I for one do not believe it was unnecessary waste of time....

The blog has always been "news and commentary." My readers, just as you did, are intelligent enough to know the difference. I don't expect them to agree with me and I welcome their opinions. At the same time, I wonder if you would have felt the same if my comments before the news release praised the legislature's actions.

At 2:11 I do not think Randy has to worry about getting raped

To Hell with the guns, it is time to require background checks on anyone attempting to buy a pressure cooker.

I might not have commented, but I do feel you are best served reporting news and corruption, whichever side it falls on. I'm a Conservative. I'm not happy with many of the things the Republicans do as well.