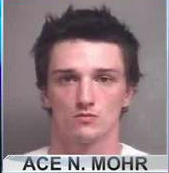 Six weeks after Ace Mohr pleaded guilty to selling heroin and other controlled substances and receiving stolen property, he learned his fate.

After his sentencing in Monday in Jasper County Circuit Court, Mohr, 24, Carthage, was a free man.

Judge David Mouton sentenced Mohr to five years in prison, then suspended the sentenced and placed him on probation for five years on the felony charge of receiving stolen property.


The terms of the agreement said Mohr could not be sentenced to more than 10 years in prison for each of the possession with intent charges and five years for receiving stolen property with the sentences to run concurrently.


The agreement calls for no prosecution on other felony charges in exchange for the guilty plea and allocution.

Mohr will also be required to pay $1,075 in restitution.

The background on Mohr's case was detailed in a January 28 Turner Report post, a portion of which is printed below:
On the plea form, Mohr wrote, (I) sold heroin to CI (confidential informant).The sale took place January 29, 2015 and the confidential informant worked for the Jasper County Sheriff's Office, according to court records.Mohr also pleaded guilty on possession with intent to distribute for an arrest made February 16, 2015, by the Carthage Police Department.


The crime was detailed in a probable cause statement written by Officer Justin Butler, who had originally arrested Mohr for driving while intoxicated:
While handcuffed to a bench in the booking room, Mohr removed a plastic baggie containing 138 grams of cocaine from his right shoe. I seized the substance from his person.

While speaking to Mohr, I discovered a plastic baggie containing two grams of methamphetamine inside his mouth under his tongue. After discovering the meth, I removed Mohr's left sock and located two more plastic baggies containing 60 Alprazolan, schedule four pills and one unknown blue pill. 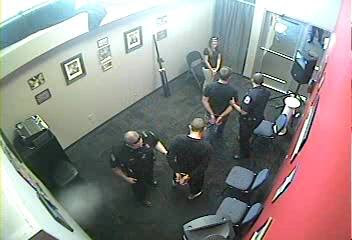 Mohr's other guilty plea came in connection with a September 3, 2016 arrest for receiving stolen property.

The Joplin Police Department arrested him at Ernie Williamson Music, 925 South Range Line Road, with guitars stolen from a Newton County church and drug paraphernalia, according to the probable cause statement.
(Ernie Williamson photo of arrest is shown at left)

-A July 19, 2016 arrest by Webb City police officers who were responding to a trespassing call
"Just prior to putting handcuffs on him, I saw him reach into his right pocket and throw a small white object," Officer Alex Bickett wrote in the probable cause statement. "I heard it hit another object and roll across the ground."The object turned out to be crystal meth, Bickett said. Another officer found marijuana in a container on Mohr's key chain, the statement indicates.

-An April 27, 2016 Jasper County Sheriff's Office arrest while Mohr was under surveillance
Carthage Police Detective Chad Allison and Jasper County Detective Ed Bailey saw a Dodge minivan pull into the driveway, according to Bailey's probable cause statement.As we exited the vehicle and identified ourselves as police, Mohr exited the van and began to run around the front of (it). As Mohr moved, I saw him throw two syringes to the ground at the front of the van, along with his keys.

When asked if he had any other syringes, Mohr replied, "No, only those two."

During a search of Mohr's person after he was detained, Allison located a portion of a pill wrapped in foil paper in a package of cigarettes found in Mohr's right front pants pocket. When asked what it was, Mohr said, "It's a Dilaudid. Mohr admitted to using Dilaudid intravenously.

When the Joplin Police Department arrested Mohr for an armed robbery at 7th and Moffet August 30, 2016, it was the third time he had been charged with that crime.While the JPD recommended robbery, armed criminal action and possession of a controlled substance against Mohr, Jasper County Prosecuting Attorney Dean Dankelson elected not to file any charges.No court records remain of Mohr's first two armed robbery arrests.


Mohr and two other men were charged with an October 4, 2015, robbery of a man staying at the Guest House Motel in Carthage. Carthage Police alleged that Mohr held the man down on the bed at knife point, while the other two men searched for valuables.

Dankelson dropped the charges after the victim failed to show for a preliminary hearing, even though the prosecuting attorney had a sworn affidavit from a Carthage police officer saying that one of Mohr's accomplices admitted the three men had committed the crime.

Charges were also dropped on an earlier armed robbery. Carthage Police arrested Mohr after he allegedly opened the front passenger door of a car at the Sonic Drive-In on November 22, 2013, slid in beside the driver and robbed him at gunpoint.
Posted by Randy at 6:51 PM

I hope this young man changes his life and turns it around. He has been given a gift to make a new start. I hope he realizes how fortunate he is. I wish him all the best.

He has a wife and job now. Hope he syays straight.

He ain't going to change. This one is destined to die in prison. Eventually he is going to get busted in a jurisdiction which will not protect him.

Mouton must have had a conflict of interest to do this...blackmail perhaps,hope not but decision a disgrace....

So,what 'Ace'did he have up his sleeve?
Was he the one trying to re adjust your nose?

Favor for a favor. He walks because he gave names of others. This is disgusting. Just keep putting these worthless people back on the streets with our kids.

What is the price of justice?

Everyone deserves another chance. Hope he makes the most of it and makes a change for the better.

Go to treatment and get straight.

Addiction is tough to beat but not impossible. It's entirely your choice.

Anyone who is victim to this one knows who to hold accountable. Why do our officers place themselves in danger just to see someone like this walk? What a joke. The rest of us pay 200-300 dollar fines for speeding. He cost us much more than a one thousand dollar fine just feeding him, paying court personal, the idiot judge, etc. Simply disgusting.

This is the reason my wife and I don't leave the house without a firearm. How many times does a criminal have to commit a crime before they stop slapping them on the wrist and kicking them loose to repeat their bad choices. They have no interest in the safety of society.

What a shocker to learn that one of the Baconator Boy's was involved. Good ole Dankelson yet again with his hand in the cookie jar. Why is he still in his role?

@6:07 AM - Not just Carthage, the entire 4 state area is bad. Seriously, it needs bulldozed.

These aren't just small time crimes. He is robbing people with weapons, multiple times. As a mother in Carthage I am truly disgusted that he gets to walk free and throw around used syringes. I am so tired of criminals running the show. What happens when someone's child finds these things that junkies never think twice about leaving lying around?

You can only "rat out" so many of your friends until somebody decides it is "Come to Jesus" time for Ole Ace.