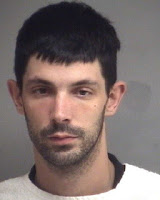 Alred allegedly forced a teenage Sonic carhop to perform a sexual act on him on March 1, 2016.

Alred is free on bond after Judge Dean Dankelson rejected the Jasper County Prosecuting Attorney's motion to revoke bond after he was stopped by a Sarcoxie police officer August 28 for his sixth driving while intoxicated charge. After the motion was filed, Joplin Police filed assault charges against Alred for attacking the editor/reporter of the Turner Report September 11 after I posted an article about the DWI arrest.
The motion to revoke Alred's bond came after his DWI arrest, which occurred with his eight-year-old daughter in the car with him and also led to him attempting to drive off and flee from the police. The following information was provided in the Monday, September 11, Turner Report:

A primary reason for revoking the bond, it is made clear in the motion is Alred's long history of driving while intoxicated.

The probable cause statement for Alred's most recent arrest, shows that he has pleaded guilty to DWI charges five times, along with another guilty plea to amended excessive blood alcohol content:

-Pleaded guilty May 2012 in Newton County Circuit Court for a December 1, 2010 DWI arrest

It is not clear how much time Alred spent in prison.
Posted by Randy at 3:41 AM

You claim charges were filed against him for assaulting you but there is nothing listed on casenet. His casenet charges do not match what you are listing in your blog. You seem to have it out for him. You should get your facts straight before posting things online about a possibly innocent individual, especially if you are going to post his picture. He hasn't been convicted yet, and as you pointed out, he does have a child. You should be ashamed of yourself.

Interesting that you should mention the photo. That one was the one the Joplin Police Department released when they issued a warrant for him for my attack. It has not only been published in the Turner Report, but the information has also been covered by the Joplin Globe, KZRG , the local television stations and I believe even the Springfield News-Leader carried something.

He has yet to be arrested for the attack on me. When, or if, that happens, I don't know if the case will go through Jasper County or through Joplin Municipal Court.

You are absolutely correct to say that he may be found not guilty of the crimes that he is charged with committing. He also has an outstanding warrant for that sixth DWI and he is scheduled to go to trial next month for statutory sodomy, a crime he allegedly committed on an underage girl.

I would prefer not to be a part of this story, but I am not the one who is responsible for that.

So he is facing felony charges including statutory sodomy and driving while intoxicated.

And let us not forget, that he has pleaded guilty to driving while intoxicated on five previous occasions.

As for his child, I have every sympathy for her. According to the Sarcoxie Police Department probable cause statement, he not only had her in the car with him while he was drinking and driving, but he also attempted to run from the officer.

Please spare me your indignation. And please do your homework next time. The attack at my apartment is well documented. Get your facts straight.

Looks like he is a repeat offender, so you can strike your statement that he is innocent. He is a menace to society and deadly on the road, since he has 6 dwi's. Lucky he hasn't killed someone. He needs to be locked up for that alone.

Good old judge Dean Dankelson at his best. Why is it that every time something corrupt is occurring his name surfaces? It's time for him to go.

Lets please vote him out already! This case is a clear indicator of his incompetence.