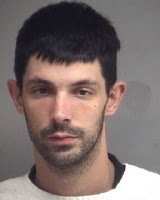 During a hearing Monday in Jasper County Circuit Court, Judge John Nicholas rejected a bond reduction motion by former Rangeline Sonic supervisor Chris Alred, who is being held in the Jasper County Jail on a $10,000 cash only bond on felony charges of driving while intoxicated as a habitual offender, resisting arrest and endangering the welfare of a child.

When the Sarcoxie Police Officer Connor Hackworth arrested Alred August 27 it was at least the sixth time Alred had been stopped for driving while intoxicated. Court records show he pleaded guilty five times to DWI and another time to excessive blood alcohol content.

The probable cause statement on the latest DWI arrest indicated he was driving with one headlight, his eight-year-old daughter was in the vehicle with him and he tried to run away, but was pulled over at the Kum and Go.

The next hearing in the case is set for April 17.

Alred's trial on a felony statutory sodomy charge is scheduled for April 24 in Jasper County Circuit Court. The next hearing in that case is set for April 9.

Good for the judge, but it seems for the offenses involved and habitual offender $10 grand seems low. Just saying that this guy should not be out on the road or out of jail for a good deal of time. Does not look good for rehabilitation.