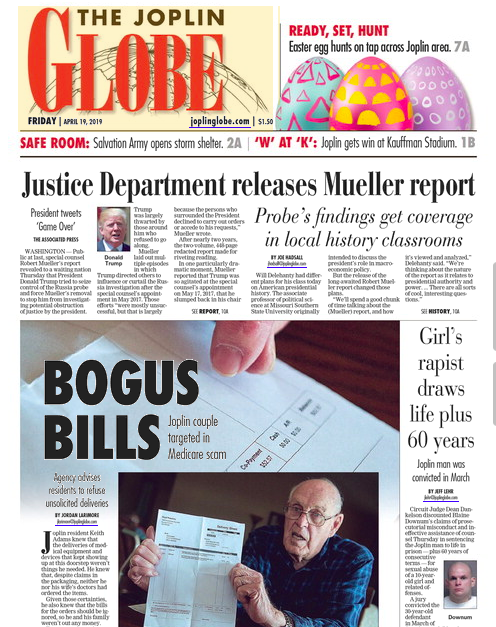 The Joplin Globe, like daily newspapers across the United States, published one of those newspapers that will likely become collector's items in the future.

The Globe, unlike many newspapers, opted for a bland headline, "Justice Department releases Mueller report," and in a nod to the pro-Trumpers in its readership, went with the subhead "President tweets 'game over' "

All accurate, but certainly not indicative of a report that portrays a White House that makes Richard Nixon look like a pinup model for ethics.

That being said, I can understand the Globe's reluctance to use headlines like hose used in most daily newspapers across the country.

Whatever the Globe readers think of the newspaper's headlines, they probably did not care much for the lead story, which immediately launched into a description of Mueller's findings emphasizing Trump's attempts to obstruct the investigation.

The Mueller report makes for sobering reading for those who take the time to read it. Of course, some will either not bother to read it, thinking it is enough that it "exonerates' Trump (which it does not, far from it), or will read it and be angry that so much taxpayer money was spent so a bunch of "angry Democrats" could smear President Trump's reputation.

Good thing the Globe readers won't be reading the United State Attorney for the District of Columbia's sentencing memo for Maria Butina. Their heads would assplode!

That would be the Russian "gun rights activist" who plead guilty to a felony count of conspiracy to act as an illegal foreign agent.

Hint- "Political Party 1" would be the Republican Party!

Hint2- "Gun Rights Organization" would be the NRA!

At some point Randy, you and some of your friends, must get over the fact Donald Trump won the election and from the looks of your field for 2020, he will remain until 2024.