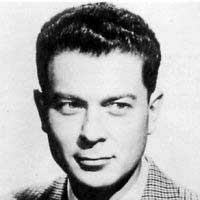 Veteran character actor, Arthur Franz, whose long list of movie credits includes a film with a Lamar connection, died Saturday at age 86.
The most well known film Franz appeared in was the John Wayne war classic, "Sands of Iwo Jima," but he also had a featured part in the 1957 movie, "Hellcats of the Navy," based on the memoirs of Admiral Charles Lockwood, a Lamar native.
That movie is better known for being the only one to costar Ronald Reagan and his wife, Nancy Davis.
Posted by Randy at 5:47 AM

Gee, what was the Lamar connection?

Oh, I get it--the Admiral was from there and that's the only connection.

Must be all that Navy food I consumed while watching Duke Wayne get killed in "The Sands of Iwo Jima."

Ron and Nancy also starred in "The Presidency of the United States," a TV series (more or less) that ran from 1980-88.

I will admit, there wasn't much of a connection, but how often does Admiral Lockwood get any recognition?