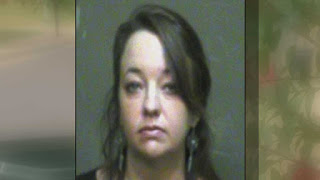 An Edmond, Oklahoma substitute teacher, who had been working in Edmond schools for the past decade, was arrested on two counts of contributing to the delinquency of a minor for allegedly attempting to sell drugs to students.

A report from Tulsa TV station KOTV indicates that Heather Lytle had more than drugs on her mind:

The current charges date back to April, when Lytle was inappropriately texting two male students through Snapchat about buying marijuana, according to case documents.

But police said that was just the beginning of the relationship Lytle had with the two students.

According to court records, investigators found several suggestive text messages where Lytle asked one of the students, "…which is the better feeling: having sex? or getting high?"

One of the students also reportedly told investigators, "at some point in the past she asked him about (her) kissing him. He told her it would be like kissing his mom."

Edmond Public Schools said Lytle isn't currently employed by EPS and won't be in the future.
Posted by Randy at 9:34 AM