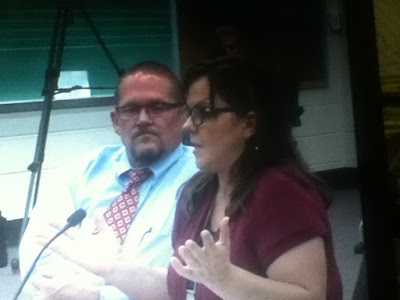 A proposal to bring in a consulting firm to teach "Cognitive Coaching" to teachers will again be considered when the Joplin R-8 Board of Education meets 7 p.m. Tuesday in the Memorial Education building.

The proposal, which would cost $69,000, was discussed at the July board meeting, but no decision was made. It was submitted by Jennifer Doshier, executive director of curriculum, instruction, and assessment. Doshier did not attend the July meeting, so the presentation was made by Assistant Director of Special Services Sandra Cantwell and Executive Director of Special Services Mark Barlass.

That discussion was covered in this passage from the July 27 Turner Report:

It was only a year ago that the board members listened to a breathless Director of Curriculum, Assessment, and Instruction Sarah Stevens as she spoke on (and on and on) about the wonders of the $100,000 a year consulting firm Core Collaborative.

The only problem is none of it was true.

Sure, Stevens produced some administrators and teachers who talked about how Core Collaborative had improved their classrooms, lifted the students' spirits and completely eliminated unsightly acne, but those were carefully selected proponents.

Teachers at all levels told the Turner Report, Core Collaborative, like many of the outside consulting firms that were formed to cash in after the passage of No Child Left Behind, took basic ideas that were already being employed in the classrooms of veteran teachers, added a few educational buzzwords and then the district started pulling dozens of teachers out of classes for training several days during the year.

When newly elected board members Jeff Koch and Jennifer Martucci, holdover Debbie Fort and Jasper County Commission appointee Gary Nodler voted not to renew the district's contract with Core Collaborative, Sarah Stevens stamped her foot and left the board room in a huff.

(Former Superintendent C. J.) Huff wasn't too happy about it either)

Stevens was later removed from her position and resigned from the district...and moved seamlessly to a job with Core Collaborative.

Though Core Collaborative is gone, there is always another patent medicine consulting firm ready to step into the breach.

The first inkling that history was repeating itself came when Interim Superintendent Norm Ridder said, "We're going to have Sarah come up here and discuss with you where we're at. We have a very excited staff who want it immediately. Sarah can explain what is going on." Ridder was referring to the female administrator who was going to present information on the consulting firm, L. B. Williams, which has been working with district officials and teachers spreading the joys of "Cognitive Coaching."

Only it wasn't Sarah Stevens who stepped up to the board table.

The administrator who gave the rapturous sales pitch for Cognitive Coaching was Assistant Director of Special Services Sandra Cantwell.

Instead of telling teachers what to do, Cantwell said, with Cognitive Coaching "you take them to a deeper level of thinking."

It not only takes teachers to a deeper level of thinking, she added, but "you coach the teachers on their thinking."

In the old days, Cantwell said, principals "went in and observed (teachers) and we wrote down everything that we saw.. We told them what they did well and what they need to improve on, which is really a judgmental statement. Cognitive Coaching takes the focus off of those judgmental statements."

With Cognitive Coaching, principals won't have to worry about doing any of that.

And it also focuses on the student, Cantwell said, making the teacher think about "what would success look like for this little guy in your school, rather than I think you need to do this, this, and this?'

"It's powerful," she said. "I even tried it on my husband." She did not mention if she was teaching him how to think.

"You're not telling them what to do; you're teaching them how to think."

No one questioned that Orwellian concept.

The biggest difference between Core Collaborative and Cognitive Coaching- Ridder is the one pushing the latest miracle cure. But don't worry, he said. "It's basically going to those who want it."

Judging from Ridder's endorsement of Cognitive Coaching, everyone wants it. When he made his rounds at the schools, "People were saying, 'I want this!' "

See what I mean.

The cost for Cognitive Coaching is $69,000, which would bring in trainers to handle three cohorts, with 40 teachers in each cohort.

The best thing about the program, Executive Director of Student Services Mark Barlass said, is that the money comes from federal Title 2A funds.

"It's no cost to the district, except for the substitutes."

Perhaps it's no cost to the district, but every taxpayer in the district (and elsewhere in the United States) will pay for it.

And substitute teachers make $80 per day, meaning that each day just one training day for the three cohorts costs $9,600.

Without addressing the professional development days or weekends, Ridder said, "The real issue is they have to be with kids to practice," indicating that if the teachers were trained in the summer, it would be completely forgotten by the beginning of school. "That's why it's during the year."

Fort persisted, continuing to note the time that teachers would be away from students.

"This is responding to the demand from teachers," Ridder said. "Teachers want this. For us to slow down, it's kind of smacking them in the face and saying, 'Hey, you're not that important. I'm concerned about that a little bit.' "

"How do you know teachers want this?" Musser asked.

"Oh, my!" Ridder exclaimed. "Just walk in the building and ask them,"

Board member Lori Musser questioned why the training could not be done locally at the Southwest Center in Webb City, where 67 R-8 teachers and administrators trained last year. Fort noted that the district pays a fee to belong to the Southwest Center.

Thanks for clarifying that.

Ridder also noted that if it would help the board, "We can bring teachers here to testify." Hmm, that sounds familiar.

"Do we have 120 teachers who are interested in this training?" Fort asked.

Do teachers get paid if they do the training in the summer and if so how much do they make each day?

A big piece of reporting is being left out, where is the objectivity? Randy, go to the school districts using it and find out what they think. Southwest Center offers the course, find out which districts that took the training and go ask them about the practices. You might have to leave your computer, I apologize.

People make judgments based on the presenter, not the practice. The proposal is right, Cognitive Coaching does make you think deeper about what is being observed. It is truly a good process and helps teachers make better decisions.

Ridder needs to be carefull and reflect. He is sounding WAY too much like some previous R8 employees.
Cognitive Coaching is not like the Core Collaborative stuff. It also is not for anyone who is made to do it. It also is 8 sessions. If arranged around PD days, that would mean less teacher time out of the classroom.
Checking with schools that use Cognitive Coaching would also be a good idea.
Maybe now isn't a good time to do this simply because of the cost and timing. Maybe it needs to wait.

@ 5:11
You're right. What would the Superintendent know?

I was wondering the same thing. If a teacher comes in during the summer to train do they get regular pay or the same as a sub for those hours? Is their a teacher expense either way?