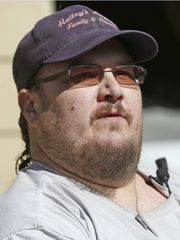 Jeffrey Barfield, 38, Springfield, stepfather of 10-year-old murder victim Hailey Owens, waived his indictment today during a 17-minute session in U. S. District Court in Springfield, and pleaded not guilty to a charge of receiving and distributing child pornography.

An investigator told the Springfield News-Leader that Hailey Owens was not a victim in the stepfather's alleged crime. If she had been, the investigator said, the charges would have been far more serious.