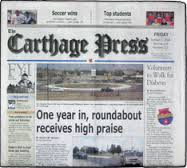 It won't be the first time, but the Carthage Press and Neosho Daily News will soon be under foreign ownership.

Fortress Investment, a hedge fund company that owns New Media, which in turn operates Gatehouse Media, has been sold to Soft Bank Group Corp., the Japanese multinational company that owns Sprint, among its other investments, for $3.3 billion.

New Media owns 564 publications, including the Press, the Daily, the Pittsburg Morning Sun, the Aurora Advertiser, and the Big Nickel in this area.

The Carthage Press and the Neosho Daily News were both once owned by Canadian-based American Publishing, which purchased the Press from another Canadian company Thompson Publishing.

Well, there goes another American business bought by foreign investors and even less control over content to brought to the citizen. Seems there used to be some scrutiny over foreign investment of our businesses, but then even our president can be bought by Russians so why not a Midwestern news system. Trump is really doing a fine job of bringing things back to the US. Latest news conference was a laughing stock for us when given by Trump. This has to be a long delayed skit by SNL

Yes, yes, 5:47. It is all the God-Emperor's fault that long-sold largely dead and irrelevant old media has been sold to different foreigners. That or you suffer from Trump Derangement Syndrome like Randy who also has been kicked out for twenty years.

I'd rather listen to japs rather than jews anyways. Tora! Tora!! Tora!!!