Probable cause: After rape, Baird told teen not to tell anyone since he was on parole and could get in trouble 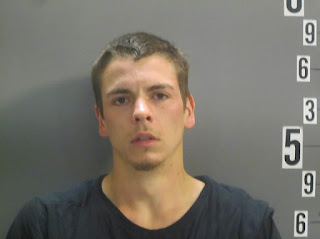 Christopher Baird, 25, Carthage, remains in Jasper County Jail on a $100,000 cash-only bond after being charged with the August 2016 forcible rape of a 16-year-old.

If he is able to post bond, online court records indicate, he will be under home arrest and have to wear an ankle monitor.

The alleged victim told the Carthage Police Department she had been lured to Baird's home under false pretenses, forcibly raped, then told to get out and not to tell anyone because he "was on parole and could get in a lot of trouble."

Online Jasper County Circuit Court records show Baird pleaded guilty April 3, 2015 to a misdemeanor charge of trespassing in the first degree and was sentenced to 30 days in the county jail.

Court records indicate the charges had been pleaded down, following an agreement worked out between Prosecuting Attorney Dean Dankelson's office and Baird's attorney, Brian Glades.

At that point, Judge Gayle Crane sentenced Baird to spend seven years in prison, but a deal was arranged for Baird to enter a long term drug treatment program. Though court records indicate Baird's program was supposed to last two years, he is shown completing the treatment on June 18, 2015, only three months after entering the program.

At the time of that plea, Baird was already on probation after pleading guilty in April 2012 to burglary following break-ins at Schrader's Excavating, Jim's Place, and Ultimate Formals.

Baird was still on probation at the time of the alleged rape, according to court records.

The circumstances that led to the charges are spelled out in the probable cause affidavit from Carthage Police officer Steve Norman:

On 4-24-2017, I attended a forensic interview at the Children's Center with 16-year-old female (initials). During the interview, (she) disclosed the following information:

In the latter part of August 2016, (she) had been introduced to Christopher Baird through her best friend, who was also a mutual friend while attending the Lamar Fair. (she) said Brad told her friend she was cute. Days following, he kept calling and asking her to hang out.

She stated a few days after the fair, Baird had contacted her by phone indicating the mutual friend was currently at his house and asking her to come over and "hang out" with them.


(She) said she went to Baird's home at 2036 Forest, Carthage, Jasper County, MO. Once there, Baird let her into the home and told her her friend was in the bedroom. (She) was able to describe the interior of the home. She said she went to the room and went to the last bedroom on the right.

She asked Baird where her friend was and he told her not to worry about it and shut the door. (She) said Baird then pushed her down to the bed and on her back.

Once on the bed, Baird climbed on top of her and grabbed her by the hair and pulled it down by the base of her neck.


The girl said that at that point Baird raped her.

After it was over, Baird told (her) to get her clothes on and leave. (She) said Baird told her not to tell anyone because he was on parole and he would get in a lot of trouble.