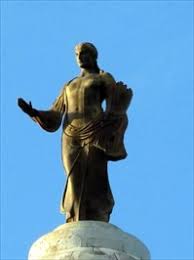 As many of us have noticed, an important part of Jefferson City’s skyline has been hidden behind white tarps and scaffolding for over a year.

While the State Capitol is under wraps, there is no secret to what’s going on.

Currently, our State Capitol is the focus of a major restoration project happening in our community. The project includes repairing and restoring the Capitol’s exterior, which has faced over 100 years of wear and tear, stretching all the way to the Capitol dome, 238 feet above the ground.

The project is making good headway and is expected to be completed by the end of 2020. But before even this year’s end, an important milestone will be reached with the return of Ceres to the top of the Capitol.

For those unfamiliar with Ceres (pronounced see-reez), she is the Roman goddess of agriculture who stands on top of the Capitol dome. Her presence there reflects the important role agriculture plays in Missouri’s past, present and future. The bronze statue stands 10 feet, 4 inches tall and weighs approximately between 1,500 and 2,000 pounds. Sculpted by Sherry Fry of Iowa, Ceres is rumored to be modeled after Audrey Munson, America’s first supermodel.

Ceres was installed on top of the Capitol on Oct. 29, 1924. Over the years, Ceres was worked on and repaired, including in 1995 when a crew restored her on the Capitol dome to prevent “bronze rot” and further deterioration to the metal.

As the current renovation project began, it was decided to remove Ceres from the building in order to carry out more extensive restoration efforts. Ceres was removed from the Capitol in November of 2018, the first time this had happened in her nearly 100-year history.

Over the past year, Ceres has been in Illinois undergoing repairs, and she just recently returned to Jefferson City. She is expected to make a full return to the top of the Capitol during the week of Dec. 16.

Restoration projects like this remind us that while we have historical items today, we won’t always have them if we don’t take good care of them.

Downtown Jefferson City has many historic buildings that, like Ceres and the State Capitol, will need some care in the coming years if we expect them to hold up for future generations. The Governor’s Mansion alone is estimated to need millions of dollars in repairs, and getting funding for the project has been a challenge.

My Senate Bill 586 hopes to address this issue by providing a tax credit to those who give to restoration and perseveration projects throughout the Capitol Complex area. Important restoration work cannot continue to be delayed, so by incentivizing giving to these projects, I believe we can help ensure these buildings will remain standing for many years to come.
Posted by Randy at 10:00 AM

Is it just me or are we too concerned with erecting superficial buildings in our image versus taking care of the citizens that are homeless, hungry, jobless or underemployed, under educated and experiencing mental problems to see the real forests. Millions for this project and cut food stamps and health care for children. What a society we live in.