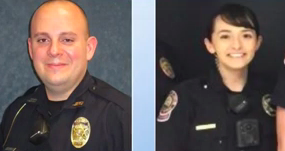 During a press conference Friday, Joplin Police Chief Matt Stewart announced that findings of a Highway Patrol investigation and an internal affairs probe cleared officers Grant Meador and Laken Rawlins of wrongdoing in connection with the August 13 shooting death of David Ingle, 31, Joplin.

Stewart showed the accompanying videos from the JPD cruiser's dashboard camera and from the body cameras worn by Meador and Rawlins. (The videos are embedded from LiveLeak.com.)
The incident was described in a JPD news release:

Ingle (pictured below) was reported as a suspicious person yelling, screaming, and possibly on drugs by one caller.

The Joplin Police Department received a second call about Ingle’s behavior as officers were arriving.

The first officer arrived and observed Ingle running down the roadway then fell to the ground yelling and screaming.

Once the second officer arrived, they attempted to detain Ingle due to his erratic behavior. Ingle at this time resisted officers.

Each officer fired their tasers at Ingle in an attempt to detain him safely. Ingle was able to resist through multiple deployments of the taser and engaged an officer.

During the taser deployments one officer was struck in the hand and she was unable to assist the other officer in detaining Ingle. The other officer at this time attempted to create distance with Ingle as Ingle engaged him. The officer fired his duty weapon striking Ingle, as Ingle was charging the officer. No weapons were located on scene.

Lifesaving efforts were completed by officers on scene until medical personnel arrived and transported Ingle to Mercy Hospital where he was pronounced deceased.

A man is dead because of a couple of bungling idiots...these 2 have no business in law enforcement

Wrong. How would you have handled it Dusty? Thank god you are not in a position to make any important decisions.