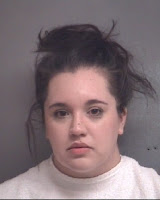 (Note: The original post has been edited to add the Joplin Police Department news release.)

Two felony charges of sexual contact with a student was filed in Jasper County Circuit Court Friday against a Joplin woman who is described in the probable cause statement as a teacher and behavioral therapist at the Bill and Virginia Leffen Autism Center in Joplin.

As conditions of that bond, West will be required to wear an ankle monitor and have no contact with anyone under the age of 18.

Court records do not indicate West is in custody.

The allegation against West is detailed in the probable cause statement:

On the approximate date of November 10, 2019, Victoria West, a teacher the Bill and Virginia Leffen Autism Center provided her personal phone number to a (redacted) student, a student she was behavioral therapist for.

The student and West began communicating via phone call and text on November 12, 2019 and eventually began meeting at Schifferdecker Park starting on the date of November 15, 2019.

On December 4th, 2019 a report was received of a staff member of the Leffen Center for Autism, located at 2808 S. Picher Ave having sexual contact with a student.

The Joplin Police Department opened an investigation at this time.

The investigation found that Victoria J.S. West, 28 years old of Joplin, MO had sexual contact with a 17-year-old male student on multiple occasions at Schifferdecker Park. West was employed as a behavioral therapist at the time of the incidents. West has been charged with Sexual Contact with a Student and is being held at the Joplin City Jail.
Posted by Randy at 10:18 AM

What if it was consensual? The former student’s age isn’t disclosed.

How disturbing! Can't trust ANYBODY anymore...

Unless the prosecuting did think of that and decided the elements of the charged crime were indeed met?

I did not realize I had done that. Thanks for catching it. It has been corrected.

That was fixed several hours ago. Refresh your screen and see if is correct.

The age was not in the original post. I added the Joplin Police Department news release when it was issued several hours later. It was not there when the earlier comment was posted.