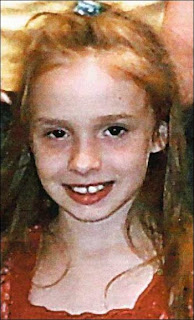 (The following is my column for the Newton County News and KY3)
She loved Hannah Montana, anything purple, and riding her bicycle.
More than anything she loved being with her classmates and teachers at Triway Elementary School in Stella.
Wednesday, November 3, marks the third anniversary of the death of that fourth grader, Rowan Ford, and the time of reckoning for her murderers is still not even on our radar.

Earlier this month, one of the two men accused of raping and strangling the nine-year-old, Chris Collings of Wheaton, turned his head in a Phelps County courtroom, as his videotaped confession was played in an effort to have it declared inadmissible. Two tapes were played, with Collings admitting to the rape and murder on the first tape and saying he acted alone in the second.

His lawyers are doing their best to have the confession tossed out, saying Collings’ constitutional rights were violated. Another complicating factor is a confession given by the other man charged with the crimes, Rowan Ford’s stepfather, David Wesley Spears.

As the wheels of justice slowly turn, Rowan, a fourth grader at the time of her death, would be nearly halfway through her seventh grade year. By the time the trials of either of the two men are actually held, her former classmates could well be walking the halls of East Newton High School.

And school, as I noted before was Rowan Ford's oasis. Life was never easy for the child. She never seemed to want to be at her home. She showed up at school long before classes began, and she stayed long after the final bell rang. Joplin Globe reporter Derek Spellman offered this assessment in an article written shortly after the murder:

Her bike was her steadfast companion and she knew the roads well.

Friends and others in the community of Stella would see her — a slender, brown-haired 9-year-old girl gliding along on her blue-tinted Blossom Quest bicycle.

Rowan Ford was careful to steer clear of heavy traffic, preferring quieter side streets that took her around the town’s tree-clad slopes and to the home of her best friend, Tyler, who happened to live across the street from Ford’s second home: the Stella Baptist Church.

There’s speculation in hindsight now, speculation after Ford went missing nearly two weeks ago, speculation that intensified after Ford’s body was found, that the Stella girl spent so much time riding around town because she was keeping away from something.

And now the death penalty is on the table for the two men who are charged with the vilest acts imaginable to man. I have never been a proponent of the death penalty, but what other penalty could be just for anyone who would commit such crimes.?

In one of my columns last year, I offered these thoughts on the Rowan Ford murder:


Rowan Ford was robbed over and over during her young life. She was deprived of her normal childhood, her innocence, and eventually, her life.

Meanwhile, the hourglass of justice continues to turn at a glacial pace, as the years pass since Rowan Ford, forever nine, was taken from us.