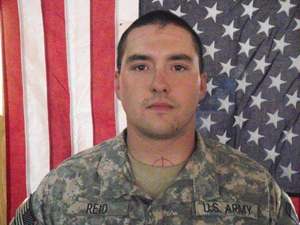 The First Amendment perversions of the Westboro Baptist Church will continue this Saturday when its members are scheduled to protest at the funeral of PFC Dylan Reid, who was killed Oct. 16 in Iraq.

The following message is featured on the church's website:

"WBC will picket the funeral of Pfc. Dylan T. Reid to remind this nation that God Himself is killing these soldiers in His wrath. The death of the young men of a nation in their prime is not a blessing but rather a curse of God for this doomed land!

"The Lord no longer builds the American house; nor does the Lord watch over and protect America. These soldiers are dying for the homosexual and other sins of America. God is now America's enemy, and God Himself is fighting against America."

Church members will be met by resistance when they arrive in Lamar.The Patriot Guard, after reading of the church's plans to protest, will set up a bumper zone to protect the family from the insanity of Rev. Fred Phelps and his followers. The Guard has provided this service at numerous military funerals since the church began its protests.

Dylan Reid's services are scheduled for 1 p.m. at Daniel Funeral Home.
Posted by Randy at 3:39 AM

Sure would like to see the Sheriff and his crew go to the coffee shop so some of the locals can do a 'ground and pound' to remember this brave soldier.

Turner again shows that it considers only its abuses of the First Amendment of the Bill of Goods to be protected.

Some church people are making the political point that God is not on the side of this mighty Evil Empire -- or the mindless little cogs used as the point of its sword of imperialism. Thus their protest is indeed political speech and thus should be protected from the mob of idiotic thugs, like Turner and the rest of the lemmings who support a pointless losing war in Asia. Like another war 40 years ago, this war will be lost and the lives of the fools killed in it will be deemed wasted by those surviving it years later. Communism won in Vietnam and so now there are sweatshops churning out junk at Walmart, low wages everyday.

But I must admit that I love it how Turner's hypocrisy is coupled by Turner's silliness. Frankly, I like it how the entire country is polarized, at odds with itself and on the verge of civil war given how so many 'think' that they should deprive others of an ability to speak out. I love it how we hate each other so much, and have no respect for the rights of others who we hate. Sooner or later it will be weak, stupid and degenerate liberal idiots like Turner who will be silenced come the backlash, which is right around the corner. Having put limits on the rights of others to speak freely, they will be treated like the immoral vermin which should be silenced on behalf of the public good. Don't like how some one else thinks or says? Then silence him by whatever means are necessary. Perfect recipe for civil war. So bring it on!!!

This war was lost when it was started. Calling some zero a hero for getting in the wrong way of a defending patriot's bullet or IED killing an invader, is an exercise in bankrupt imperialism on its very last legs.

I pray every night for the safe return of the soldiers serving in harm's way to defend your right to say such horrible things. The God of Isac, Abraham and Jacob is not a god of hate, but rather a god of love and peace. And if He, in His almighty and infinite wisdom can find in His heart to forgive the sins of a decrepit creature such as myself, then I can find it in mine to say this: May God grant you the peace it seems you so desperately need. God bless the United States of America, and God bless and keep those who give us the freedoms we so richly enjoy, even when those freedoms are used for nothing more than hate.

Every family has a right to mourn in peace. This has nothing to do with religion, and everything to do with imposing themselves upon a family in that family's darkest hour. I cannot see justification for one party to treat another innocent and grieving party in this callous manner. It's simply WRONG.

Today I was extremely proud of my community. Flags were flown everywhere around Lamar, MO today in support of the family of the fallen hero. People showed up from all over the area to block the protest from the family. Lined up between the family and the members of the Westboro Baptist Church were throngs of people holding signs stating, "God is Love". The Ghost Riders showed up, and surprised us all the the size of the group. When the members of Westboro Baptist finally did show, they got out there signs, shouted for a while, took a look around, and got back in their cars and left. I could not have been prouder of our town.

I too was at the funeral. My husband and I rode in from Fort Smith AR with the Patriot Guard. The few WBC protesters that showed were quickly covered up by Patriot Guard Riders and the people of Lamar. It did not take long before you could nither hear of see them. All I can say for their so called form of Christianity is I will pray it is not too hot when they meet our Lord and Savior and they are sent away wanting.

Frankly, Osama Bin SubContractor doesn't read Turner's idiotic blog and thus the only menaces to free speech are you mendacious mattoids voting for the very same crooked politicians whose economic and imperial policies sent off this stupid cannon-fodder off to die in some Crapistan over in Asia. Frankly, it can't occur too soon that things will fall apart and most of you degenerate idiots will all be dead in the collapse so that us, the Remnant, can live and think and speak in peace without you wooly-headed nitwits even being alive to spoil the joy of no longer having you problem-makers around.

God gives Free Will even to those who don't know how to use it and don't want it, and you natural-born degenerate slaves who hate those of us who find you inferior. But soon things will come a cropper, and I pray only that you have a single moment of clarity before you die, like a gut-shot dog, dreadfully sorry that you were ever born. As is written, the cities of an evil People will not spread over the face of the Earth.

As noted above, the Fred Phelps demonstrations are examples of political speech. If you retards weren't stung by the realization that it is stupid to offer yourself to the State-God Molech for murder and dismemberment, akin to a Tyson's white broiler chicken worshipping an idol of Don Tyson, then none of this would matter so much.

Simply put, God didn't care that some stupid imperial thug went and got killed by freedom-fighters over in Afghanistan, nor does God hear the lamentations of the ungodly. You can however, stuff your prayers some place where they, or Preparation H, might give you some relief.

Thank God 4 Fred must be a comedian because he/she made me laugh.