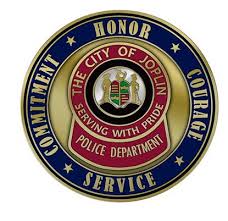 (From the Joplin Police Department)

The male fleeing on the bicycle has been identified as David W. Amerson, 35, Joplin.

He is currently still being treated for injuries sustained from the crash. The roadway is now open.

The Joplin Police Department is investigating a bicycle verses motor vehicle crash in the area of 7 th Street and Porter.

The pedestrian was attempting to flee from Joplin Police Officers on a bicycle, as the bicycle was crossing 7th Street, he was struck by a motor vehicle which was traveling westbound on 7th Street.

As a result of this investigation 7th Street has been temporarily closed while officers are investigating this incident. The roadway will be opened as soon as possible. Name of the bicyclist is not being released at this time. He did have felony and misdemeanor warrants for his arrest. He was also found to be in possession of a stolen firearm and what is expected to be a controlled substance.
Posted by Randy at 7:41 PM