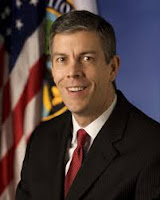 For those interested in what is going on in education, Diane Ravitch's blog is a must read.

The former official in the Department of Education under President George H. W. Bush was an early supporter of so-called reform movements, but after researching them thoroughly did a complete turnaround and has become a staunch opponent of these reforms, including Common Core State Standards.

In a post from this morning, Ravitch notes that the current Secretary of Education, Arne Duncan, is not practicing what he preaches:

Secretary of Education Arne Duncan’s children will attend the private University of Chicago Lab School, where his wife works.

Of course, everyone is free to send their children wherever they wish. What’s interesting about Duncan choosing this school is that it does not practice any of the policies that Duncan has promulgated. It is a progressive school, founded by John Dewey. No Common Core. No evaluation of teachers by test scores. No performance pay.

Duncan attended the prestigious University of Chicago Lab School. The teachers are unionized. President Obama sent his daughters there. Mayor Rahm Emanuel sends his children there.

It is amazing how many of our leaders have all of the remedies for what ails public schools, but make sure that their children do not attend any school that uses them.
Posted by Randy at 9:18 AM

This should come as no surprise to anyone. It is very easy to tell everyone else what they should be doing when it doesn't affect you. All the rhetoric in the world will not change the fact that high-stakes testing and manipulated statistics do not lead to increased learning. I wish that we could turn the tables and have politicians pay and job security linked to their performance based on measures we create. Bureaucrats need to stay out of classrooms and let teaches do what they were trained to do. Go profit from some other industry for a while.

It's interesting to read the curriculum for kindergarten and first grade. There isn't a bunch of testing, there is learning through play and many other things listed that don't go along with Common Core (or Missouri Learning) Standards.

The materials they use are actually good for child development and it doesn't look like they try to make small children act like tiny high schoolers.

Maybe we can get the new R8 school board to look at this school as an example.