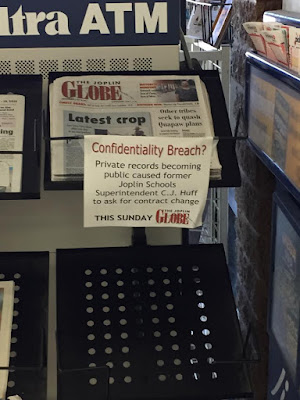 In an article that was just posted on the Joplin Globe website, the area's newspaper of record lets us know that former Joplin R-8 Superintendent C. J. Huff, who only a few weeks ago took taxpayers to the cleaners with his cushy retirement deal, is upset because his evaluation wasn't kept confidential.

When City Manager Mark Rohr was fired, the Globe continued fighting Rohr's battles, doing everything possible to savage the Loraine Report, to continue making allegations against Councilman Bill Scearce and even to use its vast investigative skills to reveal that Councilman Benjamin Rosenberg had illegally driven through town with his dog on his lap...seven months earlier.

Now the Globe appears ready to continue to fight C. J. Huff's battles against Jennifer Martucci and, though she is not mentioned in the article, Debbie Fort.

The same newspaper that kept C. J. Huff's transgressions absent from its pages is ready to mount a challenge to those who dared send him packing.

It also is irritating that C. J. Huff, who has publicly revealed confidential information about his teachers when it suited him, is whining because people found out that he did not do so well during his most recent evaluation.

As I wrote in Silver Lining in a Funnel Cloud, Huff used information from the personnel file of Kim Frencken, one of the teachers who testified for me during my hearing, only he got the information wrong and he and the district's top dollar attorney looked foolish. My book details the problems Huff caused for Frencken during the next school year, eventually leading to her resignation, including accusing her of providing information to the Turner Report, something which she did not do.

Huff also showed no qualms during a recent board meeting about using information from board member Debbie Fort's evaluations from her time as Irving Elementary principal.

The Globe has continued to sugarcoat stories about the district's financial condition, relegated Huff's vicious verbal attack against Fort to one brief paragraph on an inside page, and now takes a minor issue and makes it into a page one (and heavily promoted page one, as you can see from the accompanying photo) story for its Sunday edition.

Thank you, Joplin Globe, for once again showing why the Joplin area needs other sources of information.
***
Speaking of other sources of information, the story of how the city of Joplin and the Joplin R-8 School District have reached the point where they are in 2015 is told in Silver Lining in a Funnel Cloud, Greed, Corruption, and the Joplin Tornado. You can find out what the Joplin Globe has never told you, and will never tell you, about how Mike Woolston came to be the target of an FBI investigation and how C. J. Huff came to be unemployed. The book is available locally at Always Buying Books and Changing Hands Book Shoppe in Joplin and at Pat's Books in Carthage. It can also be purchased in paperback or e-book formats from Amazon.com at the links below.

Give it up Globe!
They make a big deal about the new board giving Huff a package, but skip over the fact the Sharp, Landis board rushed to extend his contract thru 2018 just before the results of a state audit. That extension by the old board is why they had to offer a pkg.
Also to focus on Debbie Fort not returning the Globes phone calls reminds me of another, the Globes very own, Carol Stark who refused to return phone calls with Joplin city investigator Tom Lorain.

First order of business for the new Supt.
1. Fire Jennifer Doshier
2. Demote Weatherman Jason Cravens
3. Make the new assistant Supt.'s also in charge of curriculum
4. Fire the 2 curriculum people, aka "reduction in staff"
5. Dismiss Tina Smith, hire an HR secretary, and let the building principals hire who comes in thier building
6. Fire Mike Johnston, that would save approximately $150,000 in lawsuit money and we could look at the changes that need to be made in that position.

They should have selected me, I would guarantee success, change, and action. I would have been glad to work for $110,000 per year and not taken a raise until we were able to give all staff a raise.

If the rules apply to you and not me, if you must tell the truth while I may lie, you are at a definite disadvantage, as I enjoy a decidedly advantageous position.

I really am sick of all of this. It doesn't matter how "minor" this sounds to you Turner. It is a confidentiality breach when Huff did it to a teacher and it is just as unethical when these board members discuss confidential information outside of closed session. And if what this article says about Fort not responding to requests is true, then nothing as changed. So much for honesty and transparency.

We were at Wal-mart a short while back, and the Globe had a booth on the other side of the main aisle leading to the registers. The rep asked if we wanted a free copy. We laughed as we declined and moved on. The stack of papers was large, and as far as we could tell, not one person was willing to take a free issue. While standing in line, I watched one shopper after another shake his or her head and laugh as the free offer was rejected. If this once proud Joplin institution was not so vile and blatantly engaged in mass mind washing, I would have felt sorry for it. I definitely pittied the poor vendor who was obviously embarrased at the failed attempt to give away garbage in such a public place.

JG: 'Ms. Fort, why have you been so unsupportive of the hero who saved Joplin?'

DF: 'As per previous events, please direct any and all questions to the board president. Thank you.'

When I got sick of the Globe, I stopped reading it.

The way that rag twists peoples' words, I wouldn't return their calls either.

That's ALL you took away from that article? Sit down, shut up and let the adults have our conversation.

Some one needs to,he is gone and that's all that matters now.

You have to wonder about the time of this article by the Globe. It is not a coincidence that it has come out the DAY BEFORE THE NEW SUPERINTENDENT IS INTRODUCED. It appears to be an attempt at divisiveness, steering the new person toward the supposedly ever-saintly Huff faction on the board. However, we would hope that the new person is smart enough to have done his or her homework and knows the score. If the person is a Missouri administrator, it can be presumed that he or she will have already witnessed CJ's "Joplin story" tear routine while noticing simulatneously that Joplin schools have tanked under the leadership of Captain Underpants.

How can Huff and the Globe claim that he wanted closure on his contract because of something Martucci said in March, when his contract was made in February? That doesn't add up. What does add up are the perks that he got, and you can bet he doesn't want those revealed. But they will be. His leaks come from people very close to him, not necessarily from the board. As far as ethical behavior goes, after the maneuvering of Banwart, Steele, and Landis with the commissioners prior to the resignations of Steele and Landis, the Huff faction has no right to point fingers. The Globe needs to go down. Drop your subscriptions, people, and bombard their pathetic publisher with complants every day. Contact the owner and demand some accountability here. What a rag. A very bright yellow one.

It seems to me like a very big deal was made when Fort talked to the media earlier this year. So it isn't Fort who is not being transparent that is the issue. It is that Banwart and her followers are breaking their own rules by speaking out in order to sway the opinion of the public and the new superintendent. These people are crooked and corrupt and are trying desperately to keep that covered up, and the Globe, aka Carol Stark, is assisting in every way possible, just as she did with Speck and Rohr. Makes you wonder how much she has profited from the disaster.

Is this why CJ is really staying in town? A decent man would sell his McMansion and move the kids away where the family could get a fresh start. But no, CJ is staying in Joplin for what reason? He has sufficient income, thanks to fleecing the taxpayers and donators, so the only motivation he has is to stay here and create problems for the district. Is he trying to deflect attention from his poor results? Keep his secrets covered up? Create chaos out of a sense of malignancy? All of the above, more than likely.

That's just it. The Globe is owned by a huge conglomeration, Community Holdings Inc,, which is financed by Alabama Retitirement Systems. The Globe is one of many holdings, and the layers are numerous. It will take some time to ascertain to whom, if anyone, Stark answers. Who hired her? Not a simple undertaking.

Huff can't get a job - he needs to still feel important, not impotent! He discussed his perception of a former administrator's performance in an open board meeting, why is he above reproach? Because he and the Joplin Globe put him there? Good grief, just go away and quite blaming Jennifer Martucci for your own demise from your own actions. She did nothing but get elected and bring light to a situation you would like people kept in the dark about. Deflecting and making others the problem is getting old...

You are obviously against children, and are trying to undermine CJ's efforts to help the district, and you hate puppies and ice cream, and America, and uh, you know, you are just a meany..and CJ and CART just want what's best for us...and leave Cj alone!!!

Quit worrying about the Joplin Public School System, it will self destruct soon enough. Just do what the rest of us are doing, namely sending our kids to Thomas Jefferson.

Funny......if the rest if us are sending our kids to TJ then why does the enrollment at Joplin keep growing. Secondly, sounds like you didn't get your way while playing in the sandbox so you left and took your toys home. So if your kids are at TJ why are you trolling a R 9 post?