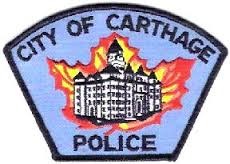 The mother of a city jail inmate who committed suicide filed a wrongful death lawsuit against the Carthage Police Department, the City of Carthage, Police Chief Greg Dagnan, and six officers.

In the lawsuit, which was filed today in U. S. District Court for the Western District of Missouri, Patricia Roderique claims that the police department did not provide "adequate and proper treatment" for her son Charles Roderique's medical and psychiatric conditions and acted "with deliberate indifference."

Because of that indifference, the petition says, "Mr. Roderique experienced extensive pain and suffering and died a horrible and painful death."

The events surrounding Charles Roderique's death were spelled out in the petition:

On August 3, 2013, at approximately 2:36 p.m., in full view of a video surveillance camera, Decedent twisted a bedsheet into a rope and sat on the lower bunk in his cell holding the sheet.

Decedent then became visibly and obviously upset, began crying, and bowed his head in prayer before eventually securing one end of the bed sheet to the top bunk and putting the other end of the bedsheet around his neck.

After removing and retying the bedsheet around his neck several times, the Defendant ultimately set his full weight on the noose after which point his body convulsed and continued to convulse until at least 2:56 p.m.

Although the incident was displayed on the video monitors as it unfolded, Defendant Mitchell willfully and recklessly failed to perform her ministerial duty to monitor Decedent by looking at the video monitor and/or took no action to alert others of Decedent’s behavior and obvious and imminent risk of serious physical harm or death or to otherwise intervene to assist Decedent.

At or after approximately 3:11 p.m., an officer or other jail employee whose identity cannot be presently determined, opened the door to Decedent’s cell and looked inside the cell. The officer made no attempt to ascertain Decedent’s condition, render aid to Decedent, or untie the sheet around Decedent’s neck, but instead left without entering the cell. Thereafter, Defendants Eppard and Macy entered Decedent’s jail cell and saw Decedent suspended from the top bunk with the sheet around his neck.

Defendants Eppard and Macy made no attempt to ascertain Decedent’s condition, render aid to Decedent, or untie the sheet around Decedent’s neck, but instead simply left the jail cell. The foregoing acts of Defendants delayed and interfered with the timely provision of aid to Decedent. Decedent was allowed to remain hanging in his cell until two firefighters eventually arrived, ordered that the sheet be cut, and began applying CPR to the Decedent.

Decedent was transported to Mercy McCune Brooks Hospital with a pulse. He was stabilized and survived going in and out of a stable condition, before ultimately dying on August 5, 2015 at Freeman Hospital. It was later discovered that Decedent had only tied the sheet in a “half-knot” that could have been easily removed by the officers.

The two-count suit alleges wrongful death and negligence and asks for general and punitive damages. Roderique is requesting a jury trial. She is represented by attorney Jose M. Bautista of Bautista Allen in Kansas City.

Charles Roderique, 26, Joplin, was being held in the Carthage Jail on charges of driving while intoxicated, careless and imprudent driving, driving while suspended, and a Joplin warrant for failure to appear.

In the August 6, 2013 Carthage Press, Dagnan made the following statement concerning Roderique's death:

Obviously it's very upsetting when something like this happens in our jail. In each incident, we fully investigated the causes, reasons and if anything can be done differently, and in both these cases we had to chalk it up to sometimes these things happen. After each incident we've modified and changed our procedures a little bit to take every possible precaution.
Posted by Randy at 3:58 PM

Lawyer up.....it's the way of the world today

Why in the hell would an officer not try and help a person; any person? What type of people do police work. I would say ignorant, incompetent, malicious, deviant persons. It is just terrible that these people care so little about others. God help us all.

I MUST SAY THAT I AGREE WITH ANONYMOUS. A PICTURE SAYS A THOUSAND WORDS. THEY WERE ON VIDEO CHECKING HIM, AND MADE A DECISION TO JUST LEAVE THE YOUNG MAN HANGING THERE!!! TRY SOMETHING, ANYTHING!!!! I MAY BE MISSING SOMETHING, NOT TRYING TO PLACE BLAME ON ANYONE, JUST A PERSON READING THE TUNNER REPORT.

Oh please. This woman just wants someone to blame. Actually, she just wants to cash in.

Maybe he looked like he was already deceased. Cops aren't EMTs.