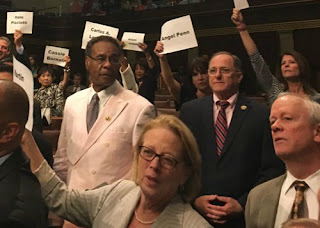 This week, my Democratic House colleagues and I held a sit-in on the Floor of the U.S. House of Representatives for nearly twenty-six hours, to demand action and a vote on preventing mass gun violence. Every time our nation witnesses one of these tragic mass shootings, moments of silence are held on the Floor. On Tuesday we came to the conclusion that we can no longer be silent. Moses, when taking the children of Israel to freedom, was told by God when he starts to pray at the Red Sea, this is not the time to pray. “This is the time,” God said to Moses, “to move forward.”

My uncle Emanuel Cleaver died two years ago, and as I was trying to clean up his house, I found seven guns. It would be hypocritical for me to say people need to have all their guns removed. That’s not what this sit-in was about. This is not gun control; this is terror control. We ought to be bold enough to say that if you are on the terror watch list, you cannot buy a gun. It’s that simple. We need to do everything we can to limit the opportunities for a potential terrorist to buy guns. But here in Congress, we are saying nothing. We are doing nothing!

Ninety percent of Americans are with us on this issue, believing that we ought to ensure that terrorists cannot buy guns. Everybody is for this, and we could not even get the microphones turned on or the cameras turned on in the House Chamber. I would expect the mics to be turned off in Moscow.

Let me just say that I don’t want anybody to give up. I don’t want the American public to give up. Don’t give up, give out, or give in, because we are going to make it happen. Hope is hope only if things look hopeless. Otherwise it’s just a nice little word. And things that look dim and dark as they do right now for the American people are where hope shines best. This is hope.

A man walks by a baseball game and asks a little boy who is sitting in a dugout, “What’s the score?” The little boy says, “18 to nothing.” The man says, “Boy, I sure hope you don’t get discouraged.” The boy responds, “Why should I be discouraged? This is the first inning; we haven’t come to bat yet.” The American public needs to know we are coming to bat. I don’t care how bad it looks now, we are coming to bat.
Posted by Randy at 4:18 PM