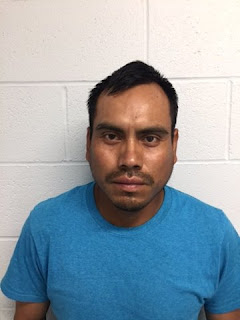 A 9:30 a.m. Thursday, June 23, arraignment is scheduled for a Carthage man charged with invasion of privacy after he allegedly used his cell phone to record or take photographs of a female in the Wal-Mart Supercenter in Webb City.

According to a news release from the Webb City Police Department, the misdemeanor charge was filed against Wilian Adan Sanchez Gonzalez, 35, for the incident, which took place June 14.

On Monday, June 13, 2016 at 15:06 hours officers with the Webb City Police Department were called to 1212 South Madison (Walmart Super Center) in reference to a Hispanic male using his cellular telephone, trying to video record or take photographs of a female in a dressing room.

Officers arrived in the area but prior to their arrival the suspect had fled in an unknown make grey van with an unknown license plate. Investigators with the police department are working to identify the suspect. Attached are surveillance photographs of the suspect as he entered then fled Walmart.

Gonzalez turned himself in after photos taken of him at the Supercenter were posted on the Webb City Police Facebook page.
Posted by Randy at 2:09 PM