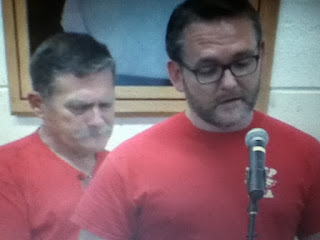 Teachers are not the only employees who were pushed out of the Joplin R-8 system thanks to the previous administration.

Joplin Education Support Personnel members detailed their problems to the Joplin R-8 Board of Education Tuesday night. Initially, the group had planned to file a grievance, but that action has been delayed following a meeting between group leaders and Interim Superintendent Norm Ridder with further meetings planned for the near future.

The problems, which have left the district 15 or 16 bus drivers short as the beginning of the 2016-2017 school year approaches and have reduced wages and extra work opportunities, are detailed by speakers Sheri Virgin, Charlie DeVaughn, Dave Foley, and Charles Virgin during the public comment period of the meeting and can be found at approximately one hour and 40 minutes into the meeting in the accompanying video.
(Photo- Dave Foley and Charlie DeVaughn)

Bus drivers have not had reduced wages. In fact they just received raises. The starting wage is $14.20.

Mike Johnson lavished himself with newly built offices, new vehicle, and countless other little perks while he told staff to suck it up or get out as he squeezed money from their wages. He always made CJ and Annie so proud.

Yes, but they have lost every opportunity to do any extra duty, including Summer work and extra jobs between routes. Many families depended on that. It is absolutely a loss of income.

Anonymous at 7:48 if the starting wage is truly $14.20 an hour, then I and anyone with more seniority is not fairing well. 9 years in and I make 67 cents more an hour. Others that have worked for the district more than 15 years no longer receive any kind of raise. Also, we have not receive a raise in two years, and the longer you work the less your raise is. It is called steps, the more loyal you are, the less your raise is.
Furthermore, for anyone that is considering the thoughts of "all it is is driving a bus", think again. It's a $100,000 +, 14 ton, 40' vehicle, with up to 65 of the most precious cargo on the planet, that is ran four times a day. As I have explained to the children, "Driving a bus is not difficult; you just have to remember your butt is bigger. The difficult part is when you add the 65 kids and 200 cars around you. Everyone, kids and cars, vying for your attention."
So the next time you are in a hurry and decide you have to get in front of "that bus" just remember those are someone's babies on there. And while they are with me, they are my babies and I will protect them until the very end.

I am proud of our bus drivers who are stepping up and speaking out. We teachers had our turn and will continue down this path, and it's great to see the classified staff do the same. Together we can make great changes, and the kids will benefit the most in the long run. Better pay and better conditions attract and retain better and more satisfied employees in every job position.

If we can afford an HR person, two athletic directors, a communications department, and two assistant superintendents, we can afford to pay staff well.

Keep up the good fight!

In reference to 10:20 AM's comment, here's a KZRG item about how bus drivers and others told the board they are no longer able to do odd jobs for the district during the summer.

Without the support classified staff the teaching staff cannot do their jobs. It is working together regardless of your title for the same purpose - to educate children. Continue to work together and work with the new administration, change is good, and it seems that finally Joplin R8 is making positive changes. People need to support each other not tear each other down. There are still a couple of more administrators that need to move on, but hopefully they will see the writing on the wall and go. Onward and upward!

Um actually they didnt lose any of that. There are people doing summer routes as we speak. You realize you have to bid on those jobs. Not every one gets the job. There are only so many summer jobs.

Summer school only lasts for a few extra weeks. It is NOT a bid job. It goes by seniority. It does not cover the duration of the Summer like normal Summer work does. You have grossly inaccurate facts.

The director of transportation is a middle man between administration and the workforce. He does and says what he is told. He is nothing but a PR lackey. He does not, nor has he ever had the best intetests of his department in mind. His only goal is to please his bosses......

These poison apples have to go. People like Mike Johnson are an embarrassment to the district.