For those who wondered, murderer of eight-year-old Doug Ringler remains behind bars 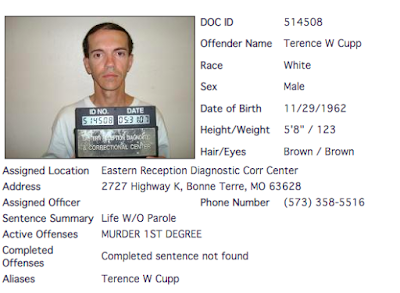 Since the publication Friday of my post noting the 25th anniversary of the brutal murder of Douglas Ryan Ringler, 8, a second grader at Hawthorne Elementary in Carthage, I have had a number of people who have asked if the man who killed him, Terry Cupp, is still behind bars.

Missouri Department of Corrections information indicate he is still locked up and there has been no change in his status.

When he pleaded guilty, he did so to avoid the death penalty, but under the full understanding that he would be sentenced to life in prison without possibility of a parole.

The accompanying screenshot is his current information from the Department of Corrections.
Posted by Randy at 4:43 PM