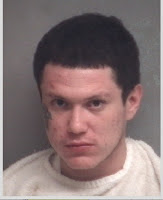 A pre-trial conference is scheduled this morning in Jasper County Circuit Court for Leonard Valdez, 22, Joplin, the accused killer of three-year-old Jonathan Munoz-Bilbrey.

The three-year-old was taken to Children's Mercy Hospital in Kansas after he suffered brain injuries, facial bruising and a laceration at his home at 1502 S. Michigan Avenue November 10, 2017. He died two days later.

The probable cause statement indicates Valdez was the only person supervising the boy at the time the injuries occurred.

The boy died 22 days after the Joplin Police Department arrested Valdez for domestic assault at the same address, 1502 S. Michigan Avenue, where police say the child abuse took place. The victim was the boy's mother, Natasha Michelle Bilbrey, 22, according to the JPD incident report.

Valdez' trial is scheduled to begin June 3.
Posted by Randy at 6:50 AM

Once he is sent to prison his fate will be set. Child molesters and child murders are thinned out. We should not need to waste time and resources on people like this. I'm sure he has a great excuse. "The drugs made me do it". "I'm bipolar" or "I just can't control myself".