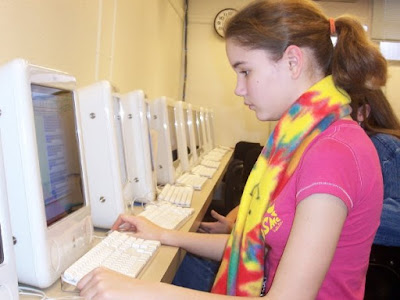 As much as I loved the old South Middle School, I can't say I ever appreciated the upstairs computer lab.

It was a small room with banks of computers on both sides and barely an aisle between them to walk.

What's worse is how the computer lab came into being. The room originally had been a bathroom.

Still, the times I spent in that lab, especially when my eighth grade communication arts (English) classes were working on the third quarter research project on the American civil rights movement were times I cherished.

Whether it was a student's excitement at suddenly discovering FBI files on his or her subject or finding a way to contact some person who was involved in the freedom rides or the Brown v. Board of Education decision, the computer lab provided, a window, albeit a claustrophobic one into the world of research and knowledge.


Each year, I had students take a few photos of their classmates at work, some of which made their way onto the Journalism Club's website. I looked over some of those photos tonight as I prepared to write this post, looking for a specific photo.

A few moments ago I found out and rediscovered the photo from the mid 2000s, with Arielle Ideker staring intently at the screen, completely absorbed in her research.

I had not seen Arielle since she left eighth grade and went on to Joplin High School. This morning, I received the news release from the Joplin Police Department that said Arielle Ideker-Graddy, 27, was he victim in a train-pedestrian collision at 15th and Michigan and was killed last night.

When teachers, whether they are still in the classroom or whether those days are behind them, hear of the death of a student, they always think back to the way that student was in the classroom. That teenage girl sitting at the computer in that cramped former bathroom at South Middle School is the Arielle Ideker I am mourning.

Another student I had not seen since those days at South Middle School was Candace McGillvray. Though I had not seen Candace since she was a student, I recognized her immediately when I saw her at the 15th Street Wal-Mart Friday afternoon.

I had not seen Candace, but I had read that she had landed her first teaching job at Steadley Elementary in Carthage She told me she never thought she would be a teacher.

I found that odd, because for some reason, I always though she would wind up in a classroom.


One thing was certain. Candace is excited about what she does and loves working with the children. She was doing some last minute Christmas shopping after what had been a tough day. The kids were all acting up, obviously ready for vacation.

I told her one thing I had learned, though I am sure it was something she already knew. Whenever you are having a day like that, every other teacher is, too. It doesn't make it an easier to deal with the students, but you know it is not because you are a miserable failure as a teacher.

I was happy to have a chance to reconnect with Candace, giving me the opportunity to add a brief memory of the successful young adult she has become to the memory I have of her as a student.

Thanks to all of you who have helped brighten my holiday with your greetings, your comments and your support. It is always heartening to know people are willing to contribute to this alternative news effort and are willing to provide financial support to help it continue to grow. Your support is much appreciated.

For those who have not contributed recently and wish to do so, you can use the PayPal buttons below the links or send a contribution to Randy Turner, 2306 E. 8th, Apt. A, Joplin, MO 64801.

I hope all of you have a merry Christmas.

This week's top 10 lists for the Turner Report, Inside Joplin and Inside Joplin Obituaries and links to each post are featured below.

5. Leggett & Platt lays off the workforce at Kentucky plant

10. Series of class action lawsuits filed against Vatterott College owner after shutdowns across the country

1. Joplin pedestrian struck by train, killed, at 15th and Michigan

2. Man's excuse to Joplin PD for driving drunk- he ran out of vodka and was trying to get more

Help support the Turner Report/Inside Joplin by subscribing or contributing using the PayPal buttons below or by sending your contribution of any size, large or small to Randy Turner, 2306 E. 8th, Apt A, Joplin, MO. Thank you.