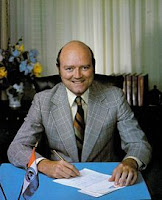 Missouri's first full-time lieutenant governor, Bill Phelps, died Tuesday at age 84 in Houston, Texas, according to a posting on the Ferry Funeral Home website. Phelps was a former Nevada resident.

Before his tenure as lieutenant governor, Phelps served 12 years in the Missouri House of Representatives, representing the Kansas City area.

After his second term as lieutenant governor, Phelps stepped out of the political arena for 16 years, returning in 1996 to win the Republican nomination for Fourth District Congress.

He lost to incumbent Democrat Ike Skelton in the general election.

More recently, Phelps has served as a spokesman for Americans for Fair Tax, a group that wants to replace the income tax with a sales tax.

Obituary and service information will be announced later by Ferry Funeral Home.
Posted by Randy at 6:33 PM