Message to Mayor Gary Shaw: Anselm severance is not a "win-win" for City of Joplin 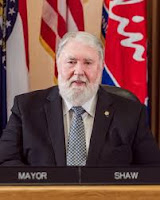 When Joplin Mayor Gary Shaw referred to the arranged resignation of City Manager Sam Anselm as a win-win situation, he had it right, but not in the way he described.

“This just seemed to be the best time for change for Sam, for the city employees, and the city itself. It was, I think council and Sam came to a conclusion. It was a win-win situation and it was time to do it."

Perhaps the mayor is right when it comes to the decision being a win for our elected city officials who were able to make the move without getting the "you're going to  hell" type tongue lashing five council members received five years ago when they fired former City Manager Mark Rohr.

Official statements were able to offer generalities about why now was the time to make the move, without going into detail.


It was also a win for Anselm. City officials wanted him gone and wanted him gone now, but had to pay to get it done. For the next seven months, unless Anselm lands another job, he will receive his more than $3,000 a week salary and continue to be covered under the city's health insurance plan.

So, it is absolutely a win-win for city officials and for Anselm.

Shaw went too far when he referred to it as a win for the city itself.

How can it be a win for the city when taxpayers will be paying a man who resigned his office somewhere in the neighborhood of $85,000 for doing nothing that will benefit them? Certainly, this is not the first time city money has been wasted. It's nowhere near the $4 million plus taxpayers paid to renovate Joe Becker Stadium to attract a poor excuse for an independent baseball team.


It is not a win-win situation for taxpayers when we do not have access to the reasons why now was the opportune time to end Sam Anselm's tenure as city manager.

This type of agreement, including some kind of severance package, has been in fashion for several years. We saw an even more egregious example with the Joplin R-8 School District's severance package, including the same non-disparaging remarks terms and an even bigger payout. It makes the situation go away, but it leaves the taxpayers in the lurch.

It won't take long before something else is the center of attention for Joplin residents and though we won't forget, there will soon be a new city manager and Sam Anselm will be an afterthought until the next time city officials decide they need to put someone new in charge.
Posted by Randy at 9:31 AM

Maybe Shaw and the other council members can make it a true win win for our city and pay his severance package from their personal bank accounts.
Everyone of them should be fired.

I liked Gary Shaw when he owned the Gazebo restaurant. Really good food at a fair price.

Gary Shaw the politician appears to be a little shady.

A "little shady" is an understatement. You can add deceitful, patronizing, and unethical to the list. Review events during his terms as Mayor and you will see a disturbing pattern.

Shaw knew Mark Rohr assaulted his wife from sworn testimony in the Loraine Report by a city employee that witnessed it and did absolutely nothing. Shaw wanted a wife beating man to continue to manage the city and disparaged the council members that found this behavior beyond acceptable. Shaw, Siebert, and Woolston are similar in lacking integrity and posing as Christians.

These people are elected ... YOU vote or you run for office ... fix it if you don't like it. Smells bad, looks bad, expensive ...

5 37 am...the Gazebo sucked they made around 300 people sick in Joplin if you remember and it was shut down....