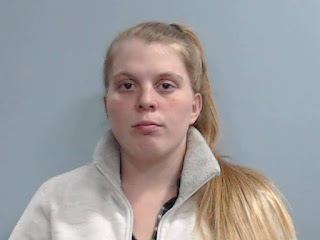 A former Joplin woman was arrested earlier this week in Kentucky on federal child pornography charges.

According to the probable cause affidavit filed in U S. District Court for the Eastern District of Kentucky, Paige Danielle Cagle, 25, admitted to making at least two pornographic videos of an infant while living in Joplin.

Though Cagle has since moved to Kentucky, the allegations against her came as a result of an investigation by the Southwest Missouri Cyber Crime Task Force.

TFO Martin believed he may have identified a hands-on sex offender in Kentucky. His investigation had identified a suspect in Missouri who had received images and a video of a child being sexually abused by a female friend who used to live in Missouri.

According to Martin, his suspect was cooperating. The suspect in Missouri, Levi ERWIN, came to the Sheriffs Office to confess to possessing child pornography. ERWIN stated that he had been communicating with a female, Paige Danielle CAGLE, using Kik and Facebook Messenger.

ERWIN said he had received pictures of CAGLE's children that were pornographic, and that there was a video that CAGLE had made in which she digitally penetrated a two-year-old's vagina.

According to information provided by TFO Martin, ERWIN knew CAGLE from her time living in Missouri and believed the child in the images was in fact her child and that CAGLE was abusing her. Further investigation by the Southwest Missouri Cyber Crime Task Force led them to believe the female suspect was in the Lexington, KY area.

TFO Martin stated he served a search warrant on Facebook and obtained IP addresses that showed CAGLE was in Lexington as recently as February 22, 2019.

Messages on Facebook appeared to indicate that CAGLE had bought a house or was in the process of closing on a house. Other information was an IP address that geolocated to the Days Inn on Broadway in Lexington.

Your affiant and the Kentucky ICAC Task Force took steps to attempt to locate CAGLE including local intelligence gathering and eventually your affiant and KSP Sgt. Mitch Hazelett contacted Verizon Wireless requesting an emergency ping order for (a phone number).

This phone was linked to CAGLE through boyfriend, William THOMAS. Verizon was able to obtain a location for the phone near New Circle Road and Bryan Avenue. Unfortunately, Verizon's pings are not exact.

Since the exact location was not able to be obtained, the phone was called by KSP Det. Wilmer A. Gatson in order to obtain the exact location. At approximately 2010 hours Det. Gatson called (the number). This number was answered by THOMAS.

At first, CAGLE said she was at her grandmother's address on Ironworks Road but Det Gatson told her that we knew she was not there because law enforcement had just left that location. CAGLE then stated she was at 1211 Brian Avenue in Lexington.

Investigators arrived at the address given by CAGLE minutes later. Upon arrival, CAGLE and THOMAS were identified by KSP personnel. SA Romagnoli and Det Gatson identified CAGLE and asked her if she would be willing to speak privately in her kitchen, away from THOMAS.

CAGLE agreed and walked from the living room into the kitchen with investigators. CAGLE was asked if she had children living with her and she indicated that she had two kids, K.C. (age 2) and E.T. (age 11 months), who were both asleep in their bedroom.

CAGLE said she also lived with William Scott THOMAS, who was her fiancee. CAGLE said they moved into 1211 Bryan Avenue five days ago. CAGLE stated her prior address was 2797 Ironworks Road, where she lived for three months with her grandmother (Darlene Stinnett).

CAGLE was asked about her places of residence aside from Kentucky and she listed them. She indicated she lived in Missouri most recently.

CAGLE was asked if she had a phone number and she stated she did not. She said her phone was broken. She said her last phone was a Samsung Galaxy Note 5. CAGLE said she broke her phone in February of 2019 and had not gotten and new one yet.

She said when she told her grandmother about it she was kicked out of her grandmother's house and that is why she had to move into her current residence. She said part of trying to stop was to delete every internet account.

After a brief break for CAGLE to collect herself, a recorder was activated. CAGLE was read the Miranda Warning and asked if she had been threatened or promised anything or beaten or if anyone had been mean to her and she replied "No." She stated she would like to continue talking to investigators and had previously said she wanted to be accountable and cooperate. CAGLE also signed a Miranda Waiver of rights.

CAGLE was asked if child pornography meant (to her) pictures of children naked or engaging in sexual activity and she said it did. She said in her Dropbox account she had images mostly of children ages 4 to 13 years of age and mostly girls. She said most of the images came from Kik. She said she also used Scout and websites like that to find people that were "the same" to collect pictures. She indicated that she started collecting child pornography at around the age of 14 or 15. She created her Dropbox around 2015 to save the images.

CAGLE stated she was attracted to girls ages 4 to 13 and this is what mostly was in her CP Dropbox account. She said there was likely other types of CP in it, but this would have been what she received from others. CAGLE also stated she would give out her Dropbox password, so others could upload images into her account. CAGLE stated she got sexual gratification from the pictures and sexual chats she had on the internet and through KIK and this was why she did it.

CAGLE stated she was abused as a child and she was asked if she understands how this type of abuse creates a cycle and she said she did. She said she felt herself wanting to continue the cycle. She was told she is continuing the cycle with her children. CAGLE agreed that she was continuing the cycle. She again became visibly upset and then stated there were 4-5 occasions with K.C.

The next portion of the affidavit contained Cagle offering the investigators a graphic description of what she did with her child from the time the child was nine months old to 1 1/2.

Two of the videos were made in Joplin, she told investigators.

CAGLE was asked specifically about ERWIN. She said she remembered Levi ERWIN from meeting him at a carnival (where she later recalled working). She said he lives in Anderson, MO. CAGLE stated she sent him a video she made of K.C. and had sexually explicit chats with him.

Charges were filed against Erwin Thursday.
Posted by Randy at 12:07 PM

This would be the time for Trump supporters chant. LOCK HER UP

No, This has nothing to do with Republicans, Democrats, Independents, Etc., - Anyone who hurts a Child in anyway should be - Locked Up...

That's crazy she was my old nieighbor right before she moved to Kentucky she never seemed like that she seemed like she was a loving mother... Im so glad I never let my girls stay at her house... But I know my other neighbor Sabele let there lil girl be at her house..

She needs to be locked up behind this cause it's not right by no means people can hide behind a mask n pretend to be someone there not that's so scary to all children...

I want my comments that I made Anonymous please...

Did she live at Country Acres?

Not locked up, oughta be killed