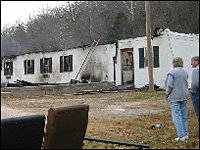 The first thing Governor Matt Blunt should do in response to today's fire at the Anderson Guest House that left 10 people dead and two dozen injured is to call for an immediate investigation into the Department of Health and Senior Services' oversight of managed care facilities.

If there had been oversight, there would be no way that a man with Robert Joseph Dupont Jr.'s background could ever have been involved in the operations of a state-licensed facility.

Dupont Jr, Joplin, is a convicted felon, having pleaded guilty in federal court on Feb. 13, 2002. to a charge of conspiracy to defraud the United States.


Dupont was the primary target in a 22-count indictment issued June 15, 2000, alleging a health care fraud scheme involving several residential care facilities, thousands of claims, and more than 200 patients, according to court records.

Government prosecutors said Dupont and others, including his stepdaughter, Kelly Liveoak charged certified patients as homebound and submitted false claims to Medicare and Medicaid. Government officials said the agencies that were affiliated with Dupont worked with doctors to file the false claims.

Though the Missouri secretary of state's office's corporation documents for Joplin River of Life Ministries, which owns the Anderson Guest House, do not list Dupont anywhere, three members are listed on the Ministries' board of directors...and two of them are Dupont's wife, Laverne.

Joplin River of Life Ministries' president, according to the 2006 annual report is listed as Calvin Wheeler, 716 Lexington Avenue, Webb City, an address which has also been listed as the home address of Dupont's stepdaughter, convicted felon Kelly Liveoak.

Dupont's connection with any managed care facility seems highly questionable in light of his checkered background. In addition to his federal fraud conviction, Dupont has had at least two facilities closed due to excess violations.

Former Lamar Press reporter Cait Purinton wrote about the closings of the Lamar Guest House and Butler Guest House during an award-winning series published in 1997.

For an article entitled "Savage Beating Brings State House Under State Scrutiny," in the July 11, 1997, Lamar Press (the final issue of that newspaper) Miss Purinton wrote this lead

Mitchell Henry was found in his room at the Lamar Guest House face down on the floor in a puddle of his own vomit June 9. His clothes were soaked with urine and his face was stuck to the floor with the dried vomit, according to Division of Aging documents. (The Division of Aging was the forerunner of the Department of Health and Senior Services.

It was Henry's beating which apparently had happened more than 24 hours earlier that led the state to begin the investigation that eventually led to the Lamar Guest House's closing. He had beaten by 17-year-old Matthew Wolff in an argument over a cigarette. Woolf had been placed at the Guest House as part of condition of his parole. He had a history of multiple criminal arrests, a past of explosive behavior and inappropriate sexual behavior, according to Division of Aging documents.

The Guest House took on Wolff though it had no one on its staff trained to deal with someone with Wolff's needs, putting the other residents at risk, according to the documents.

The beating resulted in two Class I violations, the most severe handed out during state inspections.

At the time, Paul Shumake of the Division of Aging told Miss Purinton "it could be a lifetime sentence (not being able to operate homes in Missouri) if it there is abuse or neglect to a resident."

However, today's tragic fire indicates that apparently nothing, not a federal fraud conviction and not endangering residents at a managed care facility, is enough to force state officials to hand down that life sentence.

One thing that we found out during Cait Purinton's Guest House investigation was that Division of Aging officials seldom communicated with each other.

It was Cait who ended up telling them that the same people who had problems in Lamar, were the ones who had a facility in Butler closed. You might have thought the state agency would have checked into any other homes owned by the same company (which at that time was Sandhill, Inc., and the same people, but that was not the case.

The near-fatal beating of Mitchell Henry at the Lamar Guest House might have been prevented had the Division of Aging closed the facility after it closed the same company's facility in Butler, the Butler Guest House, in May 1996.

Cait Purinton took this description of the Butler Guest House from Division of Aging documents:

In the rooms, the windows can't be easily opened, the rooms are filthy and disorderly, and the windows are dirty with smoke residue, dust, and fingerprints with dead insects lying in the window sill.
As the residents of the care facility wander down the corridors, they see brown buildup of dirt along the floor with grease and debris growing on the dust. The original gray linoleum floor now has a brownish cast to it due to the floor being littered with food debris and dirt.
The dining room and kitchen where the residents receive all their meals, are not any different from the rest of the facility. The ice machine is covered with white stains, red stains, and food debris. The pass-through window counter located between the dining room and dish washing room is covered with food debris. And the only place to sit is on the metal chairs heavily soiled with food and grease. The residents' rooms and bathrooms are dirty and unkempt in several degrees of severity. More food debris or dirt is on the floor, cigarette butts and ashes are all over the floor and window sills, the beds are unmade with dirty sheets and insects are found crawling the walls and light fixture covers. Dusty brown cobwebs climb the walls and ceilings. Dirty clothes are thrown about the rooms and the baseboards are filthy with dust.


The inspection included 43 pages of deficiencies, which were not addressed properly and eventually led to the closing of the facility.

Recent financial problems of Robert Dupont
When government rules and regulations are utilized properly they can save some lives and improve the quality of others. One such rule is that those who operate managed care facilities in the state of Missouri have to prove that they are financially solvent.

This is important in a business in which cutting corners could end up costing lives. The state has never paid much attention to the finances of Robert Dupont, even though he has owned and operated multiple facilities here for two decades.

As The Turner Report noted on Sept. 29, 2004, Dupont filed for bankruptcy in U. S. Bankruptcy Court for the Western District of Missouri. Though he had already been convicted of fraud at that time, he still listed his job as executive director of River of Life Ministries. The Guest House locations in Anderson, Joplin (2), and Carl Junction were listed as belonging to Dupont.

According to the bankruptcy court documents, at that point Dupont not only served as River of Life Ministries' executive director and pulled down a salary of $60,000 plus, but he also charged the not-for-profit organization $12,000 per month rent, with $11,400 going to the bank and the other $600 to Dupont.

The bankruptcy petition was later dismissed with Dupont and his wife filing a document saying they "would prefer to pay their creditors off on their own."

Dupont has long history of financial problems
The 2004 Chapter 11 bankruptcy filing of Robert Dupont was not the first time the Joplin businessman had seen the inside of a federal bankruptcy court. Former Barton County Recorder of Deeds Jean Keithly (at that time the deputy recorder) tipped me off that federal tax liens had been taken out against Dupont's Sandhill, Inc., owner of the Lamar Guest House and numerous other facilities.

After checking those out, I checked with Barton County Treasurer Frances Cato and found that not only had Sandhill not paid its county taxes, but that it had filed for bankruptcy in 1994. I passed those tidbits on to Cait Purinton, who by this time, was knee-deep in Division of Aging documents detailing the numerous violations at the Guest Houses.

Cait's investigation discovered the company's aborted attempt to open a Guest House in Springfield, an attempt which Dupont claimed led directly to the bankruptcy.

"The city of Springfield refused to issue necessary local licenses," company officials claimed in court documents. Sandhill sued the city of Springfield claiming discrimination against its clients because they were mentally ill. The city closed the Guest House in Springfield, claiming it was not properly zoned. The closing caused cash flow problems and caused Sandhill to default on some of its debts.
Posted by Randy at 7:32 PM

I'm trying to think of words that convey my opinion of this whole situation.

Fact is when I lived in McDonald County, taking care of the disabled was pretty much a cottage industry. There weren't a lot of good paying jobs around. It can't be a huge surprise to find that a convicted felon was behind the whole thing.

Excellent presentation of the history, the facts and the troubling 'truth' in the matter. Once again, Randy, you've been able to help the reader 'connect-the-dots'. Why does it take a tragedy to make people, politicians, etc. take notice of things that just aren't right? The Turner Report once again, does what the mainstream journalists can't seem to do: a full, researched, and straight foward presentation. Knox