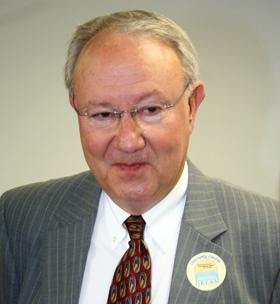 Fifteen days before his appointment to the State Highway and Transportation Commission, Neosho banker Rudy Farber contributed $50,000 to Governor Matt Blunt's re-election campaign.
The donation by Farber, whose appointment is scheduled to be discussed Thursday by the Senate's Gubernatorial Appointments Committee, is listed on the governor's April disclosure report, filed today with the Missouri Ethics Commission.
Farber's appointment was announced March 19 by Blunt, who said:

"Rudy Farber will be an asset to the Commission as they work together to create a safe and modern transportation system that best serves the needs of all Missourians. I look forward to working with Rudy and the other commissioners as we continue to improve Missouri’s roads, highways and bridges."

Later that day, The Turner Report noted that Farber has been a regular contributor to Blunt campaigns in the past, contributing a hefty amount even in the days before the General Assembly revoked contribution limits.

As I noted then:

In that same post, it was noted that Farber has also been a regular contributor to GOP interests, to the tune of more than $150,000 (now well past $200,000), not even counting the money he has poured into Republican coffers as one of the triumvirate responsible for the Southwest Missouri Leadership PAC, formerly the Nodler Leadership PAC.
Posted by Randy at 6:50 PM

Thanks for sending me the link to this. The utter mendacity just floors me.

I didn't post about this topic - I posted telling people who wonder by my place to get over here and read this post. Good gawd - the perfidy...

Look! You can pave your own way to hell. Rudy did.

Have to buy your own way to acknowledgement? I was always taught if you do something worthwhile someone else will brag for you or advance you themselves.....never once did my family teach me that I could buy my way up.

You can go to church all you want but if you are not pure of heart it is going to be wasted, Rudy.