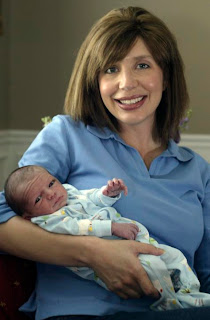 Michelle Kingsfield, who was weekday anchor at KODE News in the late 1990s, has resigned her position at WRFT and WKEF in Dayton, Ohio, according to an article in the April 16 Dayton Daily News:

Kingsfield will stay in the Dayton area and work with charities including the Leukemia & Lymphoma Society.

"I'm still going to continue to see a lot of people and be involved in the community, so from that perspective it made it a little bit easier to say goodbye," she said.

Kingsfield has been in remission for more than two years after being diagnosed in 2004 with non-Hodgkins lymphoma.

Kingsfield plans to spend time with her family and continue her involvement in a professional speaking circuit.

"I'm also in the process of writing a book about my experience," she said.

The following information about Ms. Kingsfield is featured on the Speakers on Healthcare website:

When she was 14 weeks pregnant with her second son, Michelle Kingsfield was diagnosed with stage four non-Hodgkin's lymphoma. She not only shared the shocking news with family and friends, she also shared it with the thousands of people who watch her during the week on the news in Dayton, Ohio where she's a Main Anchor for the FOX and ABC affiliates.

The local newspaper, The Dayton Daily News, followed Kingsfield's amazing story, detailing her incredible strength and inspiration as she went through six rounds of intense chemo therapy and then delivered a healthy baby boy.

Kingsfield also shared her challenges with the nation during two appearances on "Good Morning America." In March 2005, Charlie Gibson did a story on her and then interviewed her via satellite to talk about being pregnant with cancer, her positive attitude fighting the disease, and her determination to deliver a healthy baby. In June 2005, Kingsfield flew to New York with her family to appear again on "Good Morning America" for a follow-up story with her "miracle son" Robert, who was just seven weeks old. Kingsfield shared some of the tough choices she encountered, her unwavering will to survive, as well as the added difficulties of being pregnant during her treatments.

In the March 2006 edition of O, The Oprah Magazine, Kingsfield authored a story on her struggle and survival with cancer while being in the public eye. She explained how food played a big role in her emotional and physical healing in a segment called "Dish Fulfillment."

Randy - the Tara Brown mentioned in the Dayton newspaper article wouldn't happen to be another former KODE news anchor, would it?

I haven't been able to confirm that yet. There are no photos of Tara Brown on the stations' website, but I'm still checking.

Randy, I do not remember her. Was she a morning host? Was she maybe using her maiden name when she was here? Trent

Kingsfield is her maiden name. She eventually married KODE sports guy Steve Edgerley. KODE was "between" 5pm newscasts during that era. And she'll be popping up on tv again very soon and very close to where she already is.

Michelle walked away from dayton because they cut her to part time, they have a history at that station of doing that to people. And yes when her no compete is up she will probably work for the other station in dayton. She was very liked in the community.

does anyone have an email or phone number for Michelle?