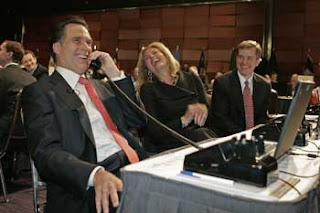 America has a rich history of protecting speech, and these protections draw on the unambiguous language of the Constitution: "Congress shall make no law … abridging the freedom of speech." We step into dangerous territory when politicians start eviscerating our fundamental freedoms in the name of amorphous principles, like campaign finance reform. If I am elected President, a top priority will be to push for the repeal of this deeply-flawed measure, and restore the full freedom of political participation and expression to the American people.

An examination of Federal Election Commission documents indicates most of Gov. Romney's big contributors were lobbyists or lobbyists' spouses. A quick check of contributions from the Washington, D. C. and Virginia areas alone, showed contributions from 28 lobbyists, who gave $71,500. He received more than $10,000 from Missouri lobbyists and their spouses, including Andrew Blunt, Tony Feather, and Harvey Tettlebaum. Feather, of course, has signed on with Gov. Romney's campaign.

Those contributing to the Romney campaign include:

-Mark Isakowitz, Isakowitz of the lobbying firm of Fierce & Isakowitz, served as host for a Tom DeLay fundraiser on Nov. 17, 2005. His firm has major nationwide clients, but also represents the Joplin Area Chamber of Commerce, the Joplin Coalition, and Greene County. Isakowitz gave $2,300.

-Roy Coffee, not the sheriff of the same name from "Bonanza," but a lobbyist with ties to disgraced former Congressman Bob Ney, $2,300

Imagine how much money Romney might have received from these lobbyists if there was no McCain-Feingold in place.
Posted by Randy at 4:15 PM

The only reason for being for lobbyists is to bribe politicians to push their agendas. It is way past time for the voters of this country to demand that politicians eliminate lobbyists.