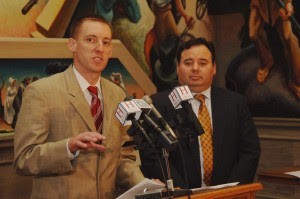 In a letter to supporters, Rep. Jason Kander, D-Kansas City, who is co-sponsoring, along with Rep. Tim Flook, R-Liberty, a bi-partisan ethics bill, listed his New Year's resolutions for 2010:

As 2010 approaches and everyone is thinking of their own new year's resolutions, I thought I should list mine.

Many important issues confront the state of Missouri in 2010, but I believe that we can more effectively address every issue if we make needed reforms to our political system.

In September, I wrote a thirteen-page memo to my colleagues on this topic. A few weeks later, the Kansas City Star ran a feature story about loopholes in the system.

On December 14th, I joined with Rep. Tim Flook (R-Liberty) in announcing House Bill 1434 which, should it pass, will substantially change Missouri politics.

In a previous newsletter, I wrote about the need for new economic development tools to help Missouri compete internationally. It is, obviously, one of my new year’s resolutions – and I know the majority of my colleagues share this same priority.

Since my last writing about the subject, the Governor weighed in heavily in favor of the bipartisan Missouri Science and Innovation Reinvestment Act. I enthusiastically supported last year’s bill and am hopeful that we can pass it in 2010.

While we work on creative ways to increase state revenue through job creation, I will work to preserve vital state services in one of the most difficult budget years in a long time. I trust that I won’t be the only member of the budget committee to work toward this goal.

Strengthen or preserve laws that protect Missourians at home and in court.

I am currently working with other lawmakers to draft Sam and Lindsay’s law, named in honor of Sam and Lindsay Porter, who died by their father’s hand in 2004. Their mother, Tina Porter, approached Jackson County Prosecutor Jim Kanatzar about changes she felt were needed to protect Missouri’s children from parental kidnappings. Jim then approached me, Sen. Victor Callahan (D-Independence) and Jackson County Sheriff Mike Sharpe about the legislation. We announced the proposed changes last Wednesday during a press conference at the Jackson County Courthouse.

Also, I will re-file bipartisan legislation in 2010 that I first pushed in 2009 to strengthen domestic violence laws, and I will once again co-sponsor bipartisan efforts to mandate insurance coverage of autism treatments.

Next, although I was the only Democratic co-sponsor of the False Claims Act last year, I'm hopeful that it will receive support on both sides of the aisle in 2010.

Finally, I will continue to fight for the preservation of the Missouri non-partisan court plan.

Do the impossible: stay fit while living in Jefferson City.

This is a pretty big goal. Thanks to the ongoing requirements of the Army National Guard, I do manage to stay in pretty decent shape year-round, but the legislative session in Jeff City from January to May really presents a challenge. These last two months, Diana and I have been getting up early for some pretty serious “extreme” morning workouts and we feel pretty good about it. She can do A LOT of pull ups. It’s pretty impressive actually.

But my schedule in Jeff City is so insane and the junk food is so quick and easy . . . it’s going to be a real test.

Heading back to Jeff City, I feel kind of like those contestants on “The Biggest Loser” who have to "leave the ranch" for a few weeks and try to do it without their trainers or their helpful dietitians.

So if you’re reading this and you’re one of the people who works with me in Jefferson City, here’s how you can help me with this resolution. If you see me about to eat pizza or some other quick and unhealthy snack, please do your best to shame me and, if necessary, attempt to physically steal the food. If nothing else, I’ll burn some calories fighting for my junk food.

So those are my resolutions. As always, thanks for reading and I look forward to hearing from you. Happy New Year!